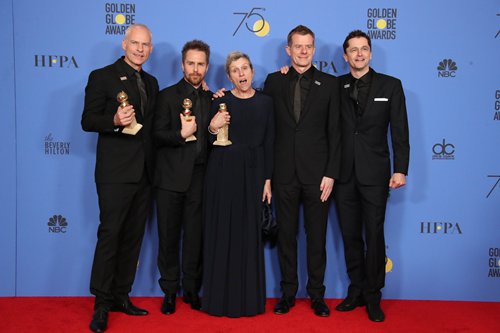 The cast and crew of Three Billboards Outside Ebbing Missouri pose with their awards at the Golden Globes on Sunday. Photo: IC 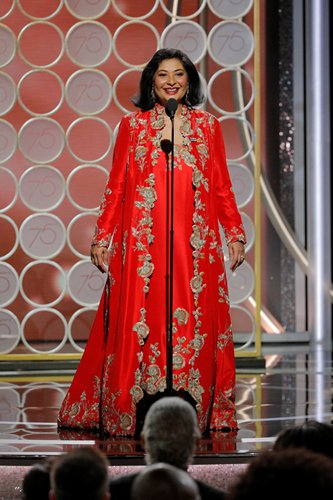 Sunday night's Golden Globes saw US film industry insiders declare war on the industry's culture of sexual harassment and abuse as it kicked off its annual awards season on a rare serious note. Crime drama Three Billboards Outside Ebbing Missouri was the big winner of the night with four awards, giving it momentum ahead of the all-important Oscars in March."The women are not here for the food, they're here for the work," Frances McDormand, lead actress in Three Billboards, said to applause, noting the "tectonic shift in our industry's power structure."  Martin McDonagh, director of Three Billboards, lost out in the directing category to Mexican filmmaker Guillermo del Toro, whose fantasy romance The Shape of Water came in as joint runner-up alongside coming-of-age film Lady Bird with two awards each.There were no nominations at all for female filmmakers, prompting withering remarks from presenters Natalie Portman, Jessica Chastain and Barbra Streisand."Did I hear it right - I was the only woman to get the best director award. And, you know, that was 1984? That was 34 years ago? Folks, time's up," Streisand said of her victory for Yentl.On the small screen, HBO's Big Little Lies scooped up a rare trio of acting awards for Nicole Kidman, Alexander Skarsgard and Laura Dern, and another trophy for best limited TV series."I hope we can elicit change through the stories we tell and the way we tell them," said Kidman, who portrayed an abused wife in the show.Dern urged Hollywood to support survivors of abuse and to promote restorative justice. "May we teach our children that speaking out without the fear of retribution is our culture's new North Star," she said.Ewan McGregor picked up his first Golden Globe in one of the night's most star-studded categories, best actor in a limited series or TV movie, for his work on Fargo.The Handmaid's Tale followed up its Emmys night glory, when it won four statuettes, by beating perennial awards juggernaut Game of Thrones to the Globe for best TV drama series.  Its star Elisabeth Moss also took home the prize for best actress in a drama, and thanked Margaret Atwood, who wrote the best-selling novel on which the Hulu series was based.Expanding presenceWhile the Golden Globes attracts a huge audience in the US, in China, however, the audience is limited to film critics and a few hardcore filmgoers and fans of US dramas. One of the reasons for this is that only a few of the film nominees were actually released in the Chinese mainland. For example, among all the films up for awards, only four - Dunkirk, Baby Driver, Coco and Loving Vincent - were screened in Chinese mainland theaters.   Looking to strengthen its presence in the Chinese market, the Golden Globes established an official account on Chinese social media platform Sina Weibo in December, 2017. The account live blogged the Golden Globes ceremony, providing pictures and videos from the event to Chinese netizens, but interest seems to remain low. As of Monday noon (Beijing time), when most of the awards were being announced, the account had fewer than 4,900 followers.   "I started to pay attention to the Golden Globes last year," Lu Zhangjin, a 20-year-old college student studying in Dalian, Northeast China's Liaoning Province, told the Global Times. A fan of US TV dramas, Lu said he managed to watch almost all the shows nominated for a Golden Globe. "I followed the Golden Globes' Sina Weibo account to check if any of my beloved stars won awards." Lu said that while he found the live blog updates on the official account convenient, he still wished it could have live streamed the entire show. Having just discovered the official Sina Weibo account a day before the ceremony, Li Xiaotai, a 20-year-old filmgoer from Southwest China's Sichuan Province, said she also found it much more convenient than having to scramble around looking for the latest news."It's great that I can learn more about the Golden Globes," she said. Yet, the young woman, a part-time photographer who loves collecting pictures of her favorite stars, pointed out that the account still lacked polish. "Some of the pictures were taken in a very casual way."   Woman in redWhile most of the Hollywood stars that attended the awards ceremony came dressed from head-to-toe in black in a show of support for the Time's Up movement against sexual harassment, actress Meher Tatna - also president of the Hollywood Foreign Press Association, the organization behind the awards - attracted attention for dressing in a bright red dress. Tatna later explained that while she stands with the movement, in Indian culture "it's customary to wear a festive color during a celebration." While the actress's choice of clothing brought her some criticism, many Chinese netizens sympathized with her, saying that moral blackmail should not be used to force people to do what they don't want to do. Explaining that he was supportive of the movement, Lu said that participation "should not be forced and people's ethnic culture should be respected." However, Chen, a 30-year-old office worker in South China's Guangdong Province who has followed the Golden Globes for six years, said she feels it was improper for Tatna to wear red, because it means she was putting her culture before an issue that anyone with a conscience should support.