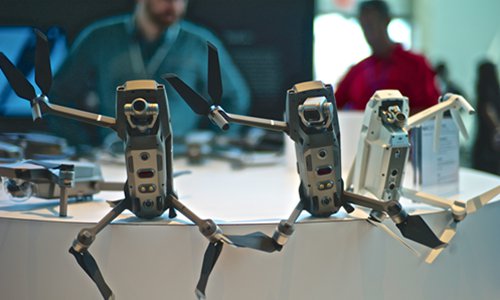 News of so-called American company Autel Robotics attempting to block DJI, the world's leading drone manufacturer, from the overseas market, seemed to be at first another escalation of the China-US trade tensions. However, it was soon found that Autel actually belongs to a Chinese company, making this a rare battle between Chinese companies abroad and leading to a fierce debate on how commercial competition should fit in the political environment.On September 4, the Trade Remedy and Investigation Bureau under China's Ministry of Commerce published a statement on its website regarding a formal complaint filed by Autel against Shenzhen-based DJI, kick-starting a comprehensive debate on how Chinese companies should compete - inside as well as outside China. The complaint was filed to the US International Trade Commission (ITC) and argued that DJI had infringed two patents owned by Autel. As a result, Autel asked the ITC to ban all DJI products from being imported into the US.Rival attackThe seemingly routine news soon spread like wildfire in China. After Chinese news sites began publishing articles with provocative headlines such as "Is the US moving to attack DJI?!" or "After ZTE, now DJI is in danger," yet another great Chinese company appeared to be falling victim to the ongoing China-US trade tensions.There was good reason to be apprehensive. The ongoing trade tensions have been accompanied with moves to block Chinese tech companies from expanding abroad. For example, the export ban on telecommunications equipment manufacturer ZTE issued by the US government in April was a big shock to China's tech industry. And DJI itself was banned last year by the US military, which cited "security" concerns.Chinese are naturally proud of their tech companies, many of whom have been the forerunners of the "going global" national strategy that aims to promote venturing overseas to compete in global markets and sharing with the world China's technological developments. DJI is one of China's most successful tech companies abroad. Founded in Shenzhen in 2006, DJI drones today dominate much of the world's markets, with a 72 percent market share in the US by 2017, according to US-based market consultancy Skylogic Research. "DJI drones are extremely stable and guarantee great value for money. They record great videos, too," a US-based drone-enthusiast told the Global Times on condition of anonymity.An import ban on DJI would be a substantial blow to the company and completely alter the landscape of the US drone market, perhaps forever, according to Autel's complaint. Autel would have much to gain, as it has a much smaller share of the US drone market, although it does have some committed fans who often praise its customer support.Unexpected turnHowever, the saga soon took a completely unexpected turn. Not long after online articles broke the news of the lawsuit, people began pointing out on Chinese social media that Autel wasn't even an American company. Autel is in fact a subsidiary of Chinese company Shenzhen Daotong Intelligent Aviation. The lawsuit was not another battle in the China-US trade conflict. It was in fact a case of two Chinese companies fighting with each other overseas - two companies that originate from the very same city."This is a very rare occurrence. Chinese companies abroad for cultural reasons tend to feel that they are compatriots in a foreign country, that they should cooperate and resolve problems among themselves," Hao Junbo, a lawyer at Beijing-based Hao Law Firm specializing in international trade, told the Global Times on Friday.Chinese netizens soon became furious. Users on Weibo and other social media lashed out at Autel's behavior, calling it a "traitor" and a "garbage company." "This is malignant competition" and "I hope Autel goes bankrupt," some netizens said.Some media reported that the conflict between DJI and Autel goes back three years ago, with several lawsuits on patent infringement being issued by both sides, in China, in the US and even in Europe.DJI to date has declined all comment requests from media agencies. Autel, however, has commented on ongoing legal matters. Autel issued a semi-apology on September 10. "The lawsuit has nothing to do with the China-US trade war, although we didn't think carefully of the timing," an Autel representative told domestic news site jiemian.com. "We only filed the lawsuit because DJI is threatening the company's survival," the firm said. Autel, who only started making drones in 2014, is indeed much smaller than DJI and had to pull the majority of its sales and marketing operations out of the US in 2017. Autel couldn't be reached for comment by the Global Times.Even as many people in China stepped up their criticism of Autel, accusing it of being a "copycat company" or a "patent troll," others were more understanding. "When dealing with patents, it's easy to develop a conflict of interest. If you use someone's patent you must pay a fee. The two companies appear to have been negotiating in China too, but they failed to reach an agreement, so now they are fighting to the end," said lawyer Hao.Nobody knows how DJI and Autel's patent conflict will turn out. However, the company's actions have attracted the attention of many Chinese people, and many expect that cooler heads will prevail."The patents in question aren't really that important. Before the news went viral, DJI didn't give the issue that much attention, and Autel probably didn't either. The news has been overhyped for political reasons," an industry insider told the Global Times.