CHINA Chinese netizens jeer riot in US Capitol as 'Karma,' say bubbles of 'democracy and freedom' have burst

Chinese netizens jeer riot in US Capitol as 'Karma,' say bubbles of 'democracy and freedom' have burst 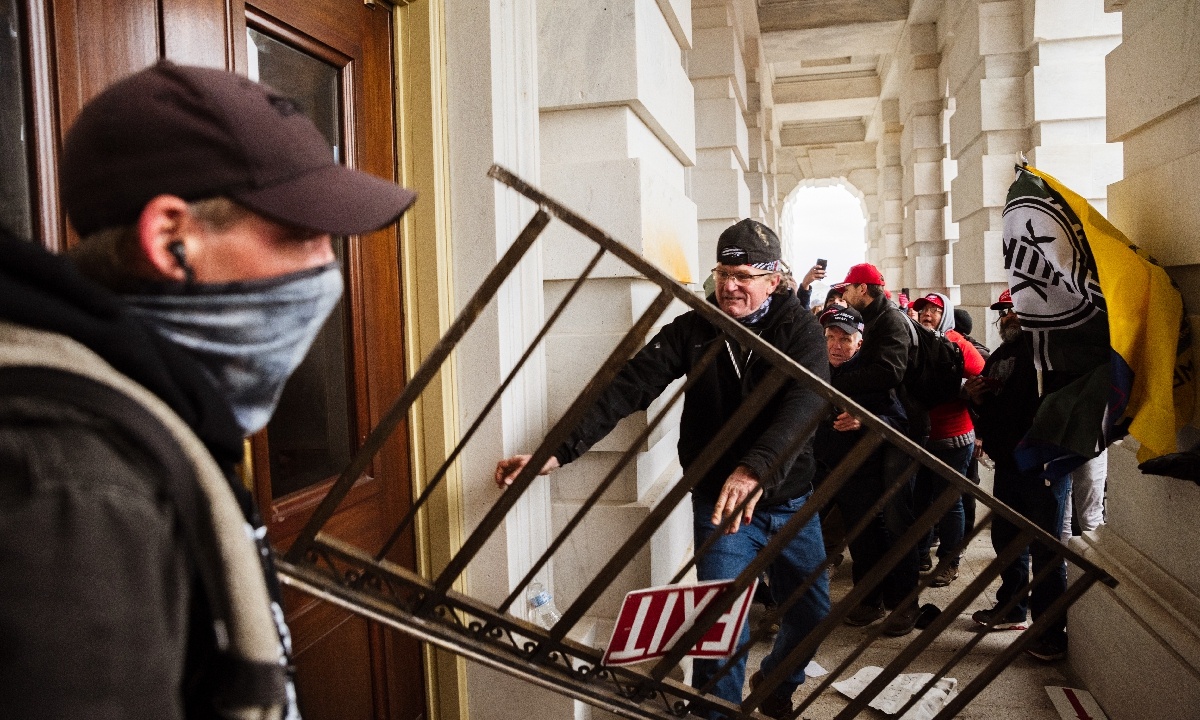 A member of a pro-Trump mob bashes an entrance of the Capitol Building in an attempt to gain access on Wednseday in Washington. (Photo: AFP)

Words like "Karma," "retribution" and "deserving" were frequently mentioned in Chinese netizens' comments when they saw the latest episode of the US' real version of House of Cards - which saw Trump supporters storming the Capitol, messing up House of Representatives Speaker Nancy Pelosi's office, clashing with police officers and looting items. The pictures went viral in US, Chinese and international news outlets after the riots began Thursday morning.

Chinese web users still remember the distress and anger they felt when they saw rioters in Hong Kong storming the Legislative Council Complex, scrawling graffiti, smashing and robbing items, and, instead of condemning the violence, US politicians hailed the "courage" of these mobs, Western media praised the "restraint" of the rioters, and House Speaker Nancy Pelosi even called it a "beautiful sight."

Now, this "beautiful sight" is taking place in the US. A Chinese netizen commented, "Pelosi can enjoy the beautiful sight - even at her office desk! For such a long time, US politicians called rioters 'freedom fighters' in other countries. Now, they finally have retribution!"

"It was like watching a thrilling action movie!" That was how Chinese netizens described the scenes early Thursday morning. 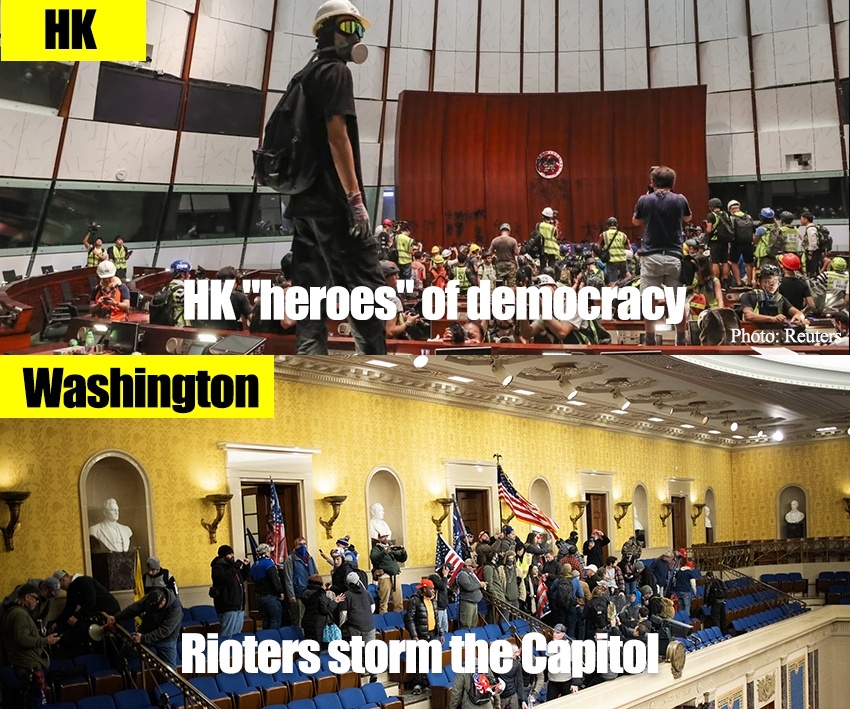 When a similar scenario happened in Hong Kong's LegCo in 2019, some US politicians like Pelosi praised rioters in the city as fighters for freedom. This has inspired some talented netizens to come up with a slogan for US mobs to continue their protests.

"Five demands, not one less. Liberate the US, the revolution of our times," they said, intimating five demands and slogans made by HK rioters to pressure the HK government. 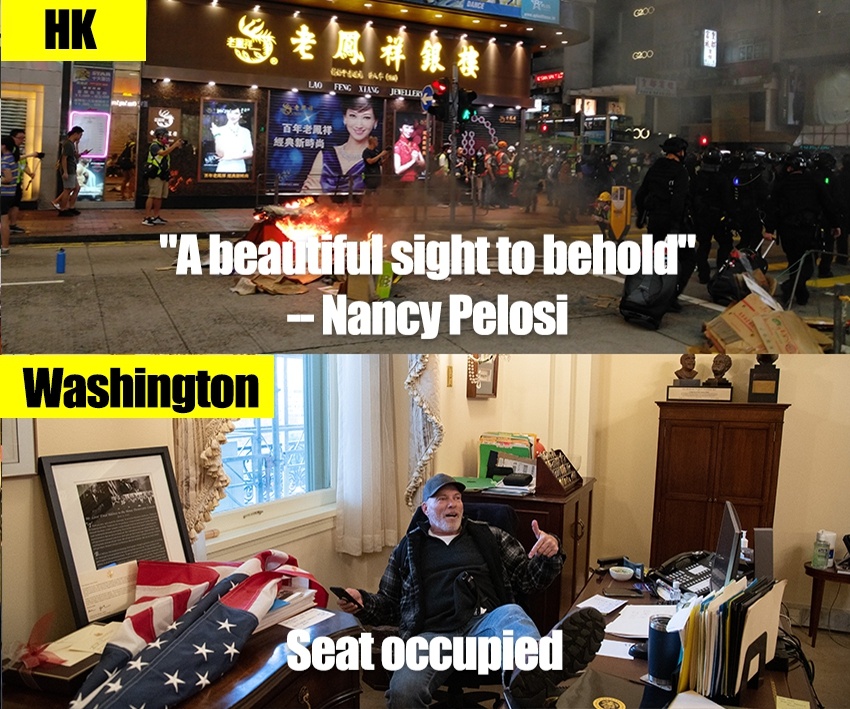 A photo of protesters seemingly holding Pelosi's office chair has also gone viral on Sina Weibo, prompting netizens to joke that there's still a smell of "flattery" left on the chair which Pelosi would call "a beautiful sight."

As of press time, the topics "Trump said he would never concede" and "Trump supporters storm Capitol" were in the "mostly searched and seen" list on China's Twitter-like platform, Sina Weibo.

Many Chinese netizens "confessed" in their comments that they saw the "chaos in the US" as revenge. After inciting so much chaos around the world under the pretext of "freedom and democracy," the US finally tasted the "karma" of its double standards.

"This is the first political coup to happen in the American continent without the involvement of US embassies," mocked one netizen. 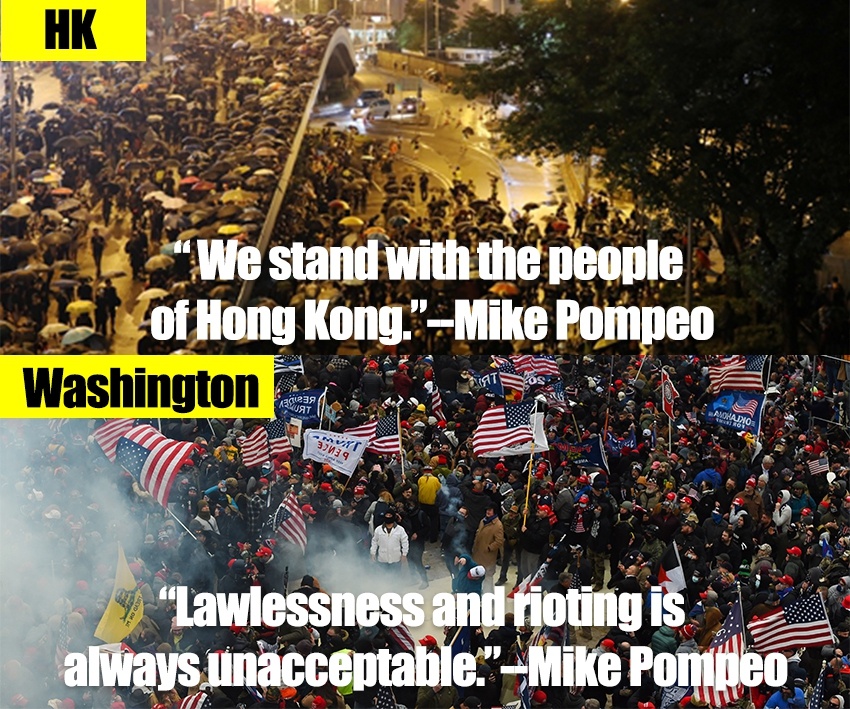 Many Chinese netizens found it hilarious that US President Donald Trump's Twitter account had been suspended for 12 hours.

Different from its previous active attitudes toward similar incidents in other places across the world, the US Embassy in China's Sina Weibo account has kept silent for what was happening in the US.

But Chinese netizens seem to "give no mercy" to unveil the Embassy's double standards and hypocrisy - they swarmed into the Embassy's account as early as 7 am, asking "Why don't you come to work on time? We are all here waiting for you to talk tall of US democracy and values."

"For a long time, US politicians criticized China for its efforts in cleaning up online rumors and disinformation and defamed us for 'hurting freedom of speech.' What are you doing right now? President Trump enjoys his right to freedom!" a netizen commented.

Chinese netizens also put pictures online of what is happening in the US and China at the same time - while pro-Trump rioters are climbing the walls of the Capitol, Chinese workers wearing protection suits in Dalian of Liaoning Province are pushing a trailer carrying daily supplies to fight COVID-19. "A sharp contrast! While Chinese are busy saving lives, the US is showing the world how it is collapsing!" a netizen commented. 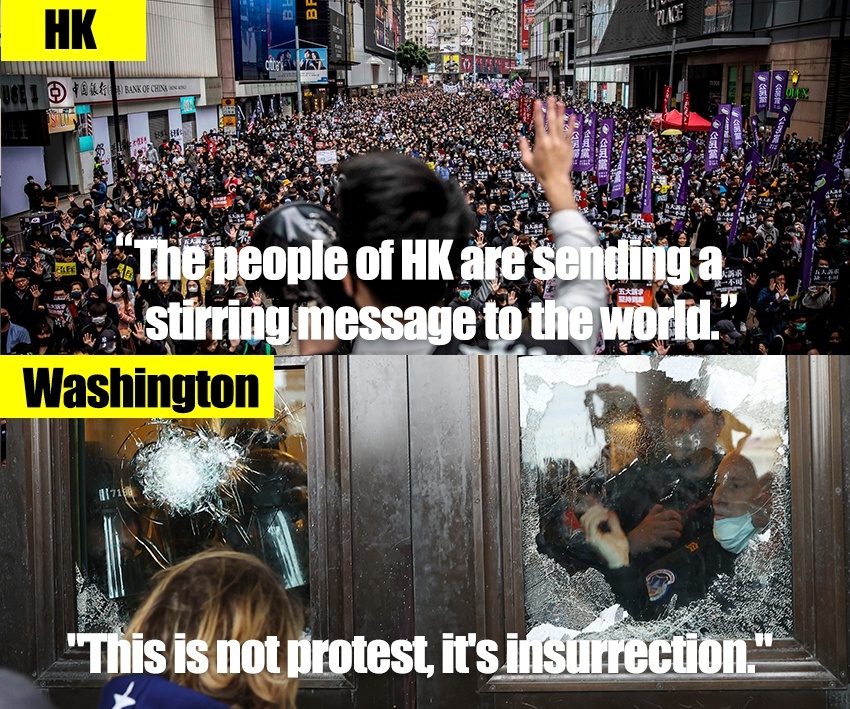 Shen Yi, a professor at the School of International Relations and Public Affairs of Fudan University, told the Global Times that Chinese net users' comments on the storming of the Capitol are "the plain and true and sincere feelings of the Chinese."

The storming of the US Capitol happened at a symbolic point of power transition, and was the first time it has happened in US history. Netizens commented that this symbolic moment clearly demonstrated the "falling of the beacon of democracy."

What happened in the US Capitol and the US' response to it have burst the bubbles of "democracy" and "freedom" and "universal values" that the US has long used to coax others, Shen said.

The US National Guard moved to deal with the rioters in the Capitol, which is also a slap in the face for the US over its previous remarks on similar incidents in other countries and regions and in China's Hong Kong. "How hypocritical of it to criticize other countries for using police to deal with rioters!"

Many US allies also expressed their concerns over the protests. British Prime Minister Boris Johnson described the scenes as "shameful," while Norwegian Prime Minister Erna Solberg said they are "unbelievable scenes" and "totally unacceptable attack on democracy."

Their voices also irritated many Chinese netizens, who slammed their double standards when it came to interfering in China's Hong Kong affairs.

Chinese netizens commented, "Why didn't Boris Johnson say he backs the US 'freedom fighters' for fairness, the way he said he backs Hong Kong protesters 'every inch of the way?'"

Tom Fowdy, a British political and international relations analyst and a graduate of Durham and Oxford universities, told the Global Times, "What we see tonight is the product of an extremely polarized political environment in the US." He added that it could be described as "cracks" in US democracy, as such a system only works if it has legitimacy amongst all its stakeholders.

Fowdy said that there is a noticeable contrast in discourse as to how the two events are portrayed in Hong Kong and in the US. When rioters stormed the HK LegCo, it was heralded as an act of brave rebellion by "pro-democracy" protesters, but when Trump supporters stormed the US capitol building it was described by the BBC as a "violent, pro-Trump mob."

"There is a clear media double standard. The United States has long held a belief that unrest in its own country is always objectively wrong, but ought to be encouraged for political purposes elsewhere," he said.