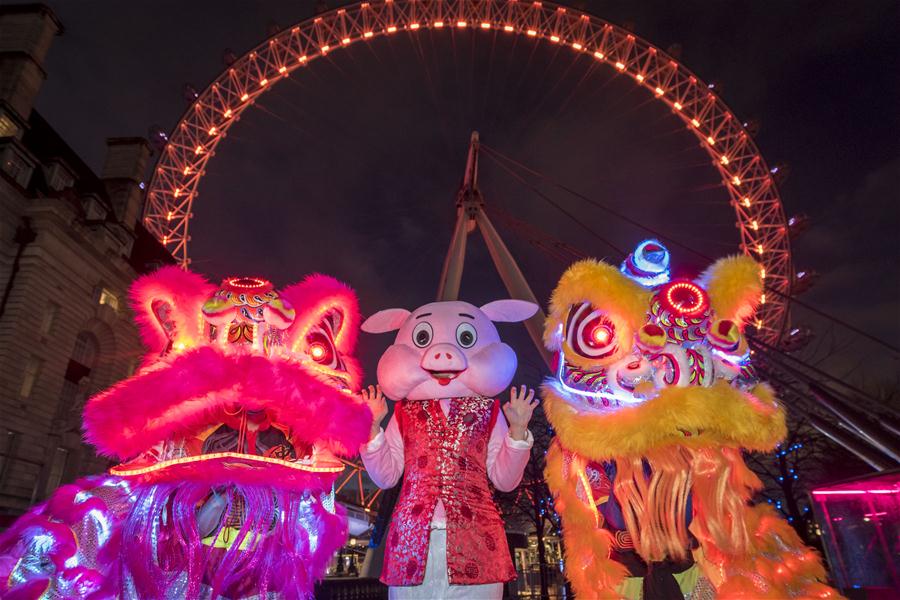 Traditional Chinese lion dancers and a character dressed as a pig pose in front of the London Eye which is lit up in red and gold to celebrate Chinese New Year, the Year of the Pig, in London, Britain, on Feb. 4 2019. (Photo: Xinhua)

The Chinese New Year, or Spring Festival, falls on Tuesday this year. "Many celebrations of Chinese New Year in our French regions illustrate the extent and popularity of Chinese culture in our country," said Valerie Pecresse, president of the Ile-de-France region.

In a greeting letter, Pecresse, for her part, expressed "... to the Chinese people, overseas Chinese and in particular to the Chinese community in France (her) best wishes for happiness, health and prosperity."

Ile-de-France "is proud to welcome the largest Chinese community in Europe, a hard-working and creative one," she noted.

Meanwhile,French President Emmanuel Macron extended his best wishes "to all those who celebrate the Lunar New Year in our country and in the world." "Best wishes for this year under the sign of the Pig," Macron wrote on Twitter Tuesday.

"The pig is a friendly animal ... that shows consistency... This animal is a good symbol of the energy that must be used today to develop our countries and find the prosperity that I wish to you," he added.

The Chinese pieces performed at the concert were mainly works from Ye Xiaogang, a well-known composer in China and the chairman of Chinese Musicians Association.

This is the first time that Higgins had attended a China-related function publicly since his re-election as the Irish president in late October last year.

In the eyes of Javier Fernandez Andrino, director of international marketing at the emblematic Corte Ingles department store, Spanish companies see the Chinese New Year as an opportunity to increase sales to Chinese tourists.

"The New Year is important for stores all over Europe, not just in Spain, because Chinese tourists have become excellent clients and it is an honor to celebrate the New Year with our visitors," said Andrino.

The Corte Ingles' flagship store in the central Paseo de la Castellana in Madrid, welcomes around 150,000 Chinese tourists every year and employs several Chinese speakers to help them make their purchases.

"The more attention we can give, then the more comfortable they feel. It helps them feel welcome and that means they spend more time with us. So that benefits us all," Andrino told Xinhua.

The importance of China to the Corte Ingles was made clear in 2018 when the company signed an agreement with Chinese company Alibaba to develop close collaboration in different areas, such as retail and distribution, cloud computing services and digital innovation and payment using mobile phones.

"The Chinese are our most important international clients..." said Andrino.