CHINA Chinese New Year celebrations delight other side of the Pacific

Chinese New Year celebrations delight other side of the Pacific 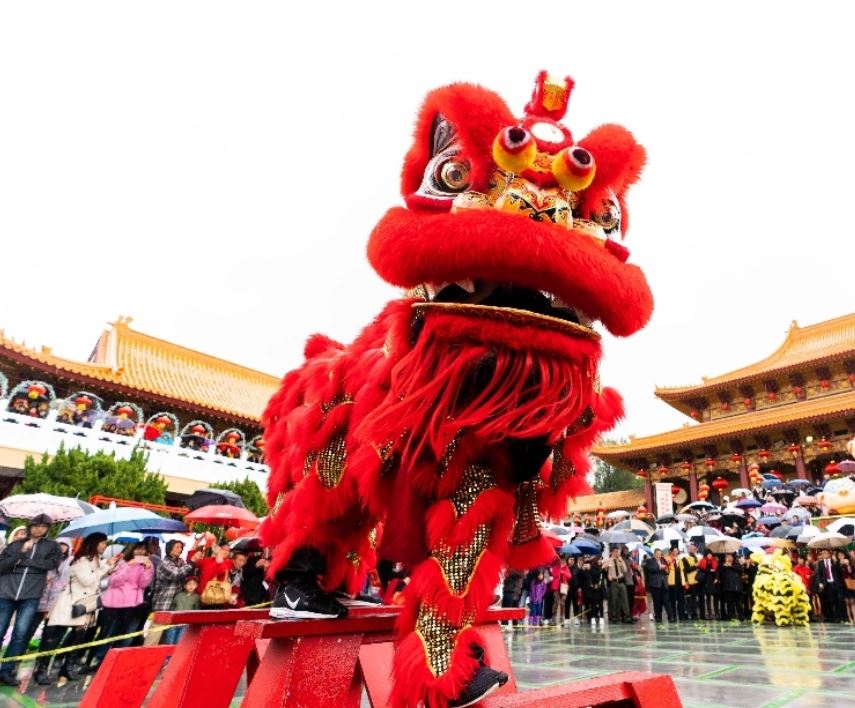 People watch lion dance on the first day of the Chinese Lunar New Year at the Hsi Lai Temple in Los Angeles County, the United States, on Feb. 5, 2019. (Photo: Xinhua)

NEW YORK, Feb. 7 (Xinhua) -- While Chinese New Year celebrations are in full swing in China, cultural activities held across North America to mark the most important festival of China are no less enthralling, spreading the joy to the other side of the Pacific.

Dragon and lion dances, Chinese cuisines, Peking opera performances, light shows... a flurry of events in the United States and Canada have deepened people's understanding of the meaning and charm of the festival. And sometimes, they may even find themselves a bit richer when they are bestowed with red packets of "lucky money," part of the festival tradition.

A FEAST FOR EYES AND PALATES

Chinese Lunar New Year, or Spring Festival, fell on Feb. 5 this year. In China, celebrations begin about a week in advance and end with the Lantern Festival on the 15th day of the new year. It is an occasion for family members to reunite, bid farewell to the past year and celebrate the advent of a new spring, with its promise of renewal and hope.

The value placed on family and the universal wish for a new start partly explain why the traditional Chinese festival can so easily transcend borders and be embraced elsewhere. For kids who are not worldly enough to grasp the significance behind it, colorful events such as dragon dances and delicious Chinese food prove to be reason enough to enjoy the festival.

In Times Square, an array of calligraphers from both China and the United States on Tuesday gave away their handwritings of "Fu," a Chinese character meaning fortune and luck, and red scarfs printed with the same character to hundreds of visitors at the "Crossroad of the World." Receivers of the gifts, upon learning the meaning of Fu character, were filled with joy and expressed their best wishes to the Chinese people around the world.

During an NBA game at Madison Square Garden on Wednesday, spectators enjoyed dragon and lion dances during halftime. They also received giveaways including red packets as well as pig dolls as the New York Knicks team celebrated the Chinese lunar Year of the Pig. A spectator won 600 U.S. dollars during a game called 'Name the Pig.'

In Chicago, more than 70 guests crowded a Chinese restaurant on Monday to enjoy traditional Chinese cuisine and the legendary "face-changing" performance. Performers of "face-changing" instantly switched masks by raising a hand, swinging a sleeve or tossing the head, to the thunderous applause and cheers from the audience.

"It is amazing and exciting. I have never seen it before," Rhonda McDonald, who came from the U.S. city of Houston to attend the celebration, told Xinhua. "I love Chinese food and Chinese culture. Every year, my kids and I celebrate the Chinese New Year."

Among the crowd, a 15-year-old high school student named Logan said he was happy to be a part of the exciting celebrations, and he came for the event every year.

"Each new year is different, and I can always feel something new from the thrilling festivities," Logan said.

Breed said that there will be a market fair this week in Chinatown, where one can find flowers and goodies, such as red packets for kids and oranges which in Chinese are a popular symbol for "good luck." She will also attend San Francisco's grand Chinese New Year Parade scheduled for Feb. 23, a Chinatown tradition that dates back to the 1860s.

The parade will feature beautiful floats, outfits, costumes, firecrackers, newly crowned Miss Chinatown U.S.A, as well as the dance performance of an 88-meter-long golden dragon operated by 180 men and women from a local martial arts group.

A FESTIVAL FOR CLOSER TIES

By celebrating the Chinese New Year together, people from both sides of the Pacific have deepened their understanding of each other's cultures and made the ties closer, officials have said.

"There is no better way than to celebrate the Chinese New Year through cultural exchanges," said David Whitaker, CEO of Choose Chicago, the official tourism organization for the city, on Tuesday as the city kicked off Chinese New Year celebrations.

"The more we learn about China, the better we understand each other," Whitaker told Xinhua.

"We welcome the Chinese, and think sharing some of their interesting cultural experiences with American audiences right here in Beverly Hills makes us understand and appreciate each other more."

The Empire State Building's lighting of Lunar New Year serves as a symbol of friendship between the peoples of the United States and China, said Huang, the consul general.

After putting a Chinese couplet on the door of the governor's office at the Missouri State Capitol in Jefferson City, Missouri Governor Mike Parson and First Lady Teresa Parson held a Chinese Lunar New Year reception at their mansion on Monday evening.

"I truly appreciate how the Asian American community has come from across the state to Jefferson City to celebrate the Lunar New Year in the Missouri State Capitol. We're excited to have this opportunity to share the diversity and cultural traditions of all Missouri," Parson said. "Rest assured that we will continue to lead the state with a noble vision and an open heart."