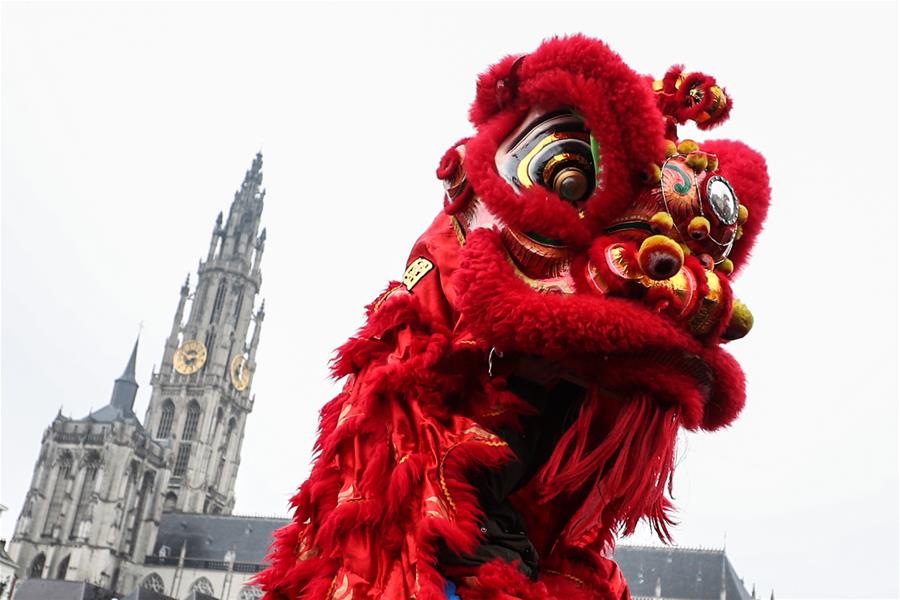 BEIJING, Feb. 5 (Xinhua) -- For centuries, the Lunar New Year has been the most important festival in China and a large part of Asia. People leave behind the worries and troubles of the past year and move on to a new spring full of hope and life.

Today, the festival has become a worldwide holiday as China plays a bigger role in world affairs and people all around the world share the wish to leave uncertainties behind and usher in a peaceful and prosperous year ahead. As the Chinese New Year falls on Tuesday, major cities across the globe are vying to hold the greatest celebration of this traditional festival outside China.

Tuesday marks the first day of the Year of the Pig in the Chinese Zodiac. The Chinese Zodiac is based on a twelve-year cycle, and each year in that cycle is under a certain animal sign. It is believed people are born with the positive traits of their zodiacs. For example, babies born in this Year of the Pig are expected to be kind and fortunate.

Peppa, the sweet little piglet from a British animated TV series, has become a media sensation in this Year of the Pig. A nationwide cinema release, "Peppa Celebrates Chinese New Year," co-produced by Alibaba Pictures, debuted in China on Tuesday. Its promotional video named "What's Peppa" went viral and clocked some 1.5 billion hits on Chinese social media platforms such as Weibo and Wechat.

"Peppa is the perfect ambassador for the Year of the Pig celebrations as it is the most iconic pig on screen," said Oliver Dumont, president, Family & Brands, of the leading Canadian entertainment conglomerate Entertainment One (eOne), which owns Peppa Pig and is a co-producer of the movie.

Other than the Chinese film, a two-part episode special of Peppa Pig has been created specifically for the Chinese New Year. "This is a great opportunity to promote and share the Chinese language and culture all around the world," Dumont said.

In the movie and TV episode, Peppa learns what the Chinese New Year is about and experiences many of its traditions with her family, teaching dozens of millions of fans about Chinese culture.

The Chinese New Year, also known as the Spring Festival, is the most important festival in China. Celebrations begin about a week in advance and end with the Lantern Festival on the 15th day of the new year. Receiving red packets of "lucky money," having big family meals and welcoming the God of Wealth with deafening firecrackers are among the many highlights of the festivities. 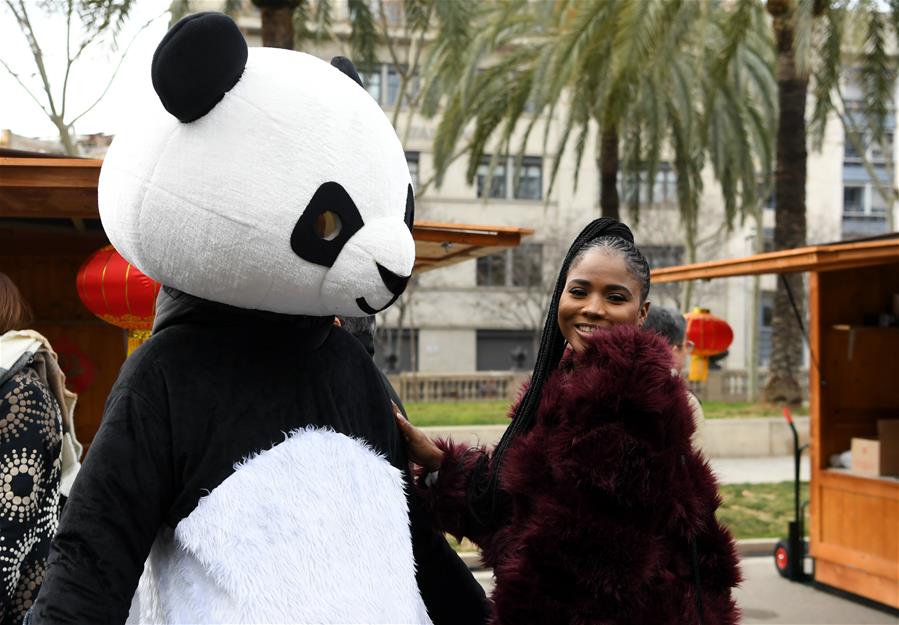 A girl poses for a photo with a person in panda costume at an activity to greet Chinese New Year in Barcelona, Spain, Feb. 2, 2019. (Photo: Xinhua)

For other parts of the world, the Chinese New Year has become a great occasion to enjoy exotic food, culture and to party. Organizers in cities around the world are racking their brains vying to stage the most brilliant celebration outside China.

Aleksandar Zivanovic, an engineer and regular visitor of the museum, found the European Space Agency's introduction of the Chinese space program most fascinating. "It's a nice way to celebrate the Chinese New Year, and a good way to find out about Chinese culture and what's going on in Chinese science," he said.

Celebrations in London will last a month with a series of activities culminating in the Trafalgar Square parade on Feb. 10, which organizers say to be the biggest Chinese New Year celebration outside Asia.

Sydney's signature Harbor Bridge is glowing red and pink to provide a breathtaking setting for the Chinese New Year celebrations.

A spectacular 5-meter-tall matrix-style steel pig lantern glows by the landmark Sydney Opera House. Another 11 giant lanterns representing the remaining zodiac animals, including an elaborate eight-meter stack of monkeys, an electric sheep and a six-meter-tall inflatable ox, light up the Sydney Harbor.

Sydney has been celebrating the lunar new year for 22 years. This year's events will include the lunar lanterns exhibition, Chinatown celebrations, community performances, dragon boat races and lion dances across the city. "It's a celebration for our Asian community, but it's a wonderful educational experience for the rest of us," Mayor of Sydney Clover Moore said.

A window display featuring pigs in a traditional Chinese style has also been installed in the building's lobby windows on Fifth Avenue. Visitors can appreciate pigs as portrayed in various art forms, including clay sculptures, paper cuts, sugar-figure blowing and lanterns.

It is for the 19th consecutive year that the Empire State Building, standing 443 meters above midtown Manhattan, shines in honor of the Chinese New Year.

New York is also known around the world for the splendid firecracker shows that light up the Hudson River and parts of the city during Chinese New Year celebrations.

New York and some other U.S. states have made the lunar new year a public holiday. This is particularly unusual given that the Chinese New Year does not have a set date on the Gregorian calendar. Instead, it falls on a day between Jan. 21 and Feb. 20 each year.

In addition to being widely celebrated across the globe, the lunar new year is also a public holiday and important national festival in many countries such as Vietnam, Indonesia and South Korea.

The Chinese New Year has become an international event as its traditions and values touch the hearts of people all around the world. As Chinese President Xi Jinping has said, the vision, concepts and values of China's traditional culture are also valuable for addressing the issues that humanity faces. 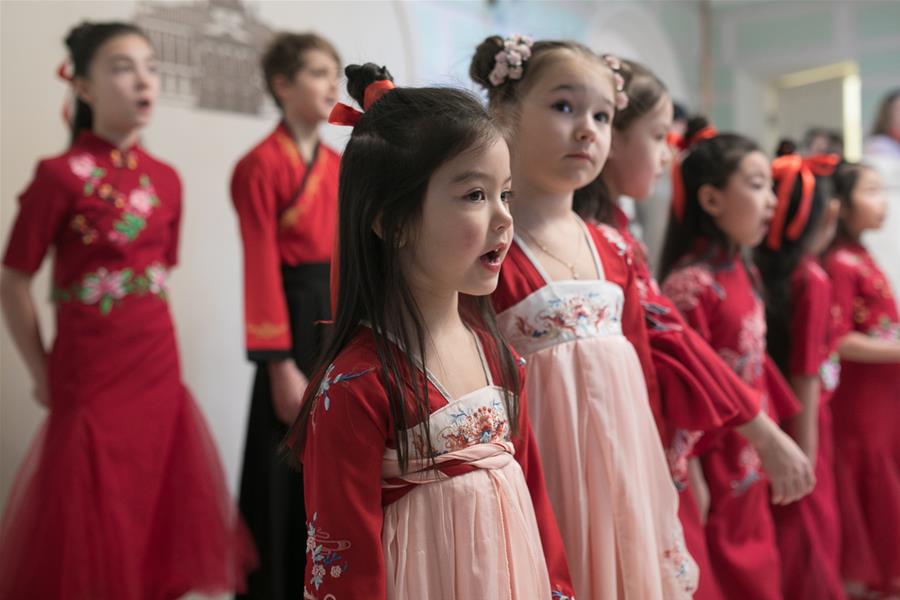 For example, in a congratulatory video speech, Japanese Prime Minister Shinzo Abe spoke Chinese to wish the Chinese people a happy new year. He pledged to relax visa policies for Chinese students studying in Japan and called for more people-to-people exchanges between the two countries. Abe also expressed the wish that bilateral ties further improve in the new year.

New Zealand Prime Minister Jacinda Ardern posted her lunar new year's wishes on social media. She took the opportunity to thank the Chinese community in New Zealand for its hard work and contributions. Ardern expressed the hope to strengthen ties with China, boosting cooperation in trade, education and tourism.