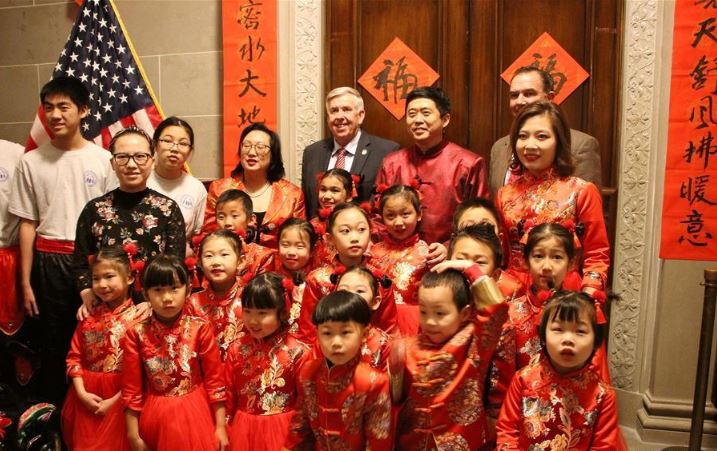 Missouri Governor Mike Parson (back, C) poses for photos with teachers and students from Columbia Chinese Language School in front of his office door with Chinese New Year decorations, in Jefferson City, Missouri, the United States, on Feb. 4, 2019. (Photo: Xinhua)

JEFFERSON CITY, the United States, Feb. 5 (Xinhua) -- After putting a Chinese couplet on the door of the governor's office at the Missouri State Capitol in Jefferson City, Missouri Governor Mike Parson and First Lady Teresa Parson held a Chinese Lunar New Year reception at their mansion on Monday evening.

Before the reception, a traditional lion dance warmed up the atmosphere, and students from the Confucius Institute at the University of Missouri performed Chinese instruments like flute and zither.

After being told the meaning of the couplet, which marks fortune and good luck, Parson told the crowd in the mansion that he thought he was the lucky person having these children singing for him.

"It's so important that we understand how diverse Missouri is and the different cultures we have here, and that we're all the same Missourians when we come here tonight," Parson said.

Missouri State Department of Labor and Industrial Relations Director Anna Hui told Xinhua that it is the first time in Missouri history that both the governor and the lieutenant governor have actually hosted an event to hang a couplet at the governor's office.

"I think it is very special for the Chinese community because it is really the first opportunity that they've had to interact with state leadership at such a high level. It is state's recognition for Chinese American society," Hui sad.

Du Wei, principal of Columbia Chinese Language School in Columbia, Missouri, told Xinhua that he is very proud of what the Chinese community has done for local people, and the faculty will work together to continue to promote the Chinese culture in the United States.