China isn't getting carried away with the buoyant trade growth of recent months, with officials warning of a possible slowdown in trade growth in the second half, while vowing to address problems like rising raw material prices and congested maritime logistics, which are eroding trading companies' profits. 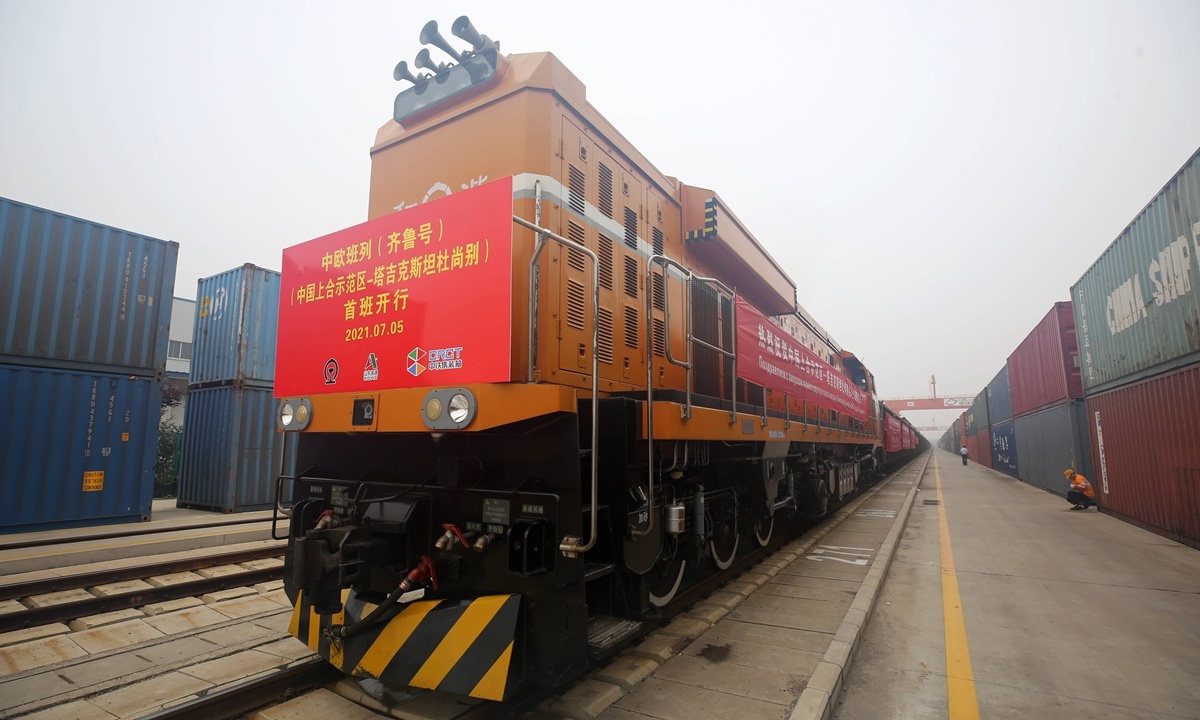 The first "express train of the China-Shanghai Cooperation Organization (SCO)" sets out from the China-SCO economic zone in Qingdao, East China's Shandong Province to Duschanbe, Tajikistan on Monday. The line is the eighth onshore trade route under the China-SCO and will provide new logistics solutions for economic and trade exchanges between Tajikistan and China, Japan and South Korea, as well as neighboring countries and regions. Photo: cnsphoto

These top-level efforts to curb potential risks as well as the ongoing global pandemic are likely to push China's export growth to nearly 20 percent for the full year, which would be a robust result, experts said.

Li Xingqian, director of the Foreign Trade Department of the Ministry of Commerce (MOFCOM), said on Thursday that China's trade growth will likely slow in the second half of this year due to multiple factors such as a fading base effect, rising raw material prices and congested maritime logistics.

The MOFCOM will take more "targeted measures" in partnership with relevant government departments and local governments to reduce trade companies' costs, while pushing high-quality development of the sector, Li said.

The country's trade has so far achieved outstanding growth, considering many other countries' performances and external challenges like the pandemic.

In the first half of this year, China's exports rose 38.6 percent year-on-year in US dollar terms, while imports surged by 36 percent. Total trade grew by 37.4 percent to $2.8 trillion.

Though the outlook remains positive for China's trade, the global pandemic situation, which resulted in supply chain changes, also bring uncertainties to China's trade sector. The uncertainties are a blend of good and bad, officials said, as companies will face both challenges and opportunities as a result of the recovering global economy.

"On the one hand, China's exports will be facing intensifying market competition; on the other hand, countries will need a lot of raw materials and manufacturing equipment to reboot manufacturing, which has resulted in increasing demand for China's intermediate goods," Li said.

Experts said that challenges exist for China's trade sector, especially arising from a potential fall in demand for labor-intensive products as a result of supply chain recovery in Southeast Asian countries, but in general, they still anticipate robust second-half trade growth.

Tian Yun, former vice director of the Beijing Economic Operation Association, predicted that China's exports could achieve double-digit growth in the second half of this year, while full-year growth could be near 20 percent.

Tian explained that the recovery of the global economy might not be as fast as many people thought. "The possibility of a pandemic resurgence is very likely in the second half of this year in many countries, which will again drive up demand for China-made goods," he said.

As the risks like falling overseas demand and rising raw material prices have already been identified, the government is taking measures to solve them, such as by cutting the reserve requirement ratio. "This means that the problems, negative as they are, are unlikely to become too serious," he said.

Li also said that the government is closely watching specific risk factors like rising material costs and exchange rate fluctuations. For example, the government is multiplying China's import channels to stabilize the prices of bulk commodities. It is also pushing financial institutions to improve exchange rate hedging products for companies.

Tian said that he didn't see any massive demand resurgence coming on a global basis, so the current wave of commodity price surges should be temporary.

But he warned that if global central banks' monetary policies tighten in the second half of this year, there will be a drop in global demand, and that's a rather serious risk for China's trade sector.