URUMQI, Aug. 12 (Xinhua) -- Officials and scholars in northwest China's Xinjiang Uygur Autonomous Region on Thursday lambasted the United States for its practice of "long-arm jurisdiction" and trampling on the international order. 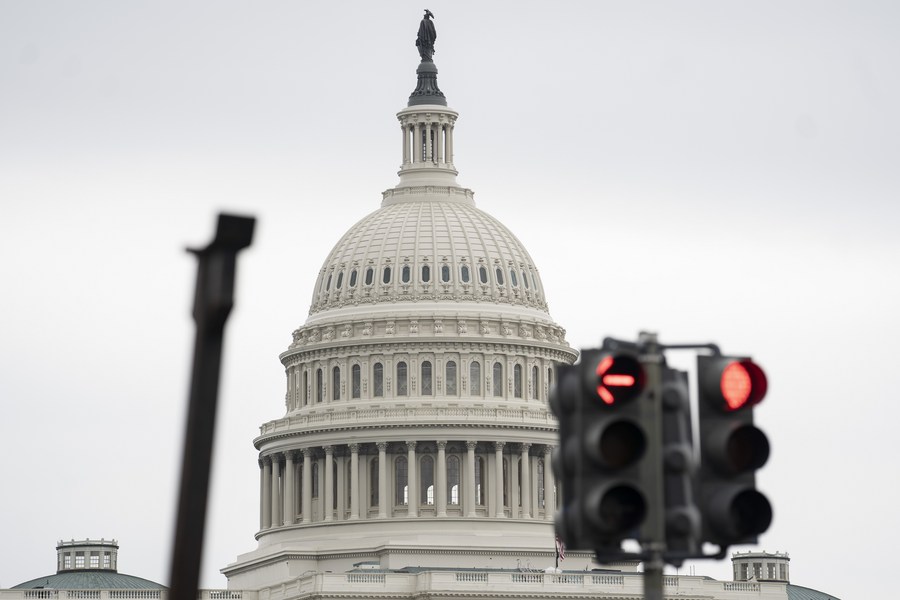 Photo taken on May 28, 2021 shows the U.S. Capitol building behind traffic lights in Washington, D.C., the United States. (Xinhua/Liu Jie)

Xu Guixiang, a spokesperson for the regional government, said at a press conference that the "long-arm jurisdiction" has become a hegemonic tool for the United States to suppress foreign entities, interfere in other countries' internal affairs and even subvert foreign governments.

"The United States is always pointing a flashlight at others, but never at itself," Xu said in response to some U.S. politicians' attempts to push forward legislation on Xinjiang.

Liu Weidong, a U.S. affairs expert at the Chinese Academy of Social Sciences, said the United States treats its own Muslims as distrusted outsiders, who have long faced discrimination, suppression and poor protection of their basic rights.

"The United States, while persecuting Muslims and carrying out de-Islamization, is hurling accusations at China's de-radicalization efforts in Xinjiang," Liu said.

"They have no respect for Islam and they do not really care about Muslims. Instead, they are exploiting the religious feelings of Muslims to stoke instability," he said.

Zulhayat Ismayil, a professor at Xinjiang University, pointed out the U.S. poor racial record, including ethnic cleansing of native Indians, discrimination and brutality against African Americans and bullying of Asian Americans.

"With such serious issues at home, what right does the United States have to make irresponsible remarks about other countries' ethnic policies?" she said.