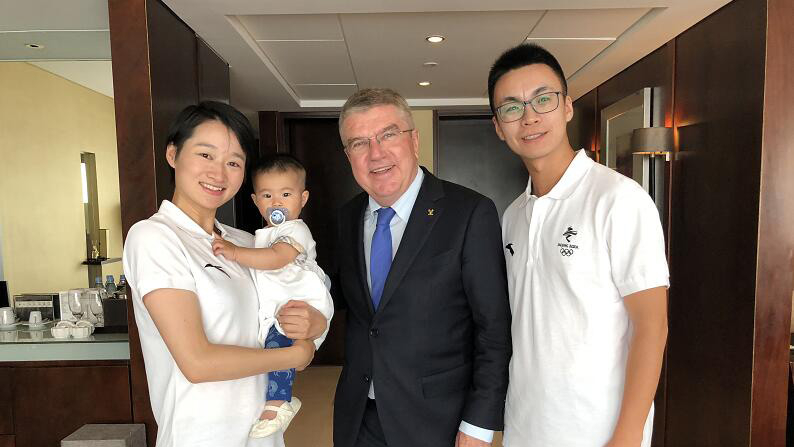 Hou Kun, also known as Justin Hou, and his wife, two-time Taekwondo Olympic gold-winner, Wu Jingyu met Thomas Bach, president of the International Olympic Committee (IOC) on Thursday, according to Xinhua. This is the sixth meeting between Bach and Hou since 2013. The young man just finished an amazing tour on June 1: He has visited all 45 host cities for Summer and Winter Olympic Games.

The IOC president spoke highly of Hou's efforts and praised him as an example of promoting the Olympics. He even wrote an inscription for his tour: "Dear Justin, with heartfelt congratulations for a true Olympic achievement and with many thanks for your great dedication to the Olympic values."

On June 1, Hou finished his trip in Singapore and Sapporo and became the world's first person to visit all Olympic Cities. He expressed his gratitude to his family, friends and partners who have supported him the whole time.

Hou said this tour is more than just traveling to those cities but also a study into what impact the Olympics had on the host cities, what change it brought to people's lives and how the cities have carried forward the Olympic legacies. He believed that Beijing has a lot to learn from their experience.