Chinese parents rush to send boys to 'school of masculinity'

What makes a man a man? As China is having a fierce debate about whether men in the entertainment industry tend to act effeminately on the screen, an institute in Beijing has vowed to "rescue the boys." 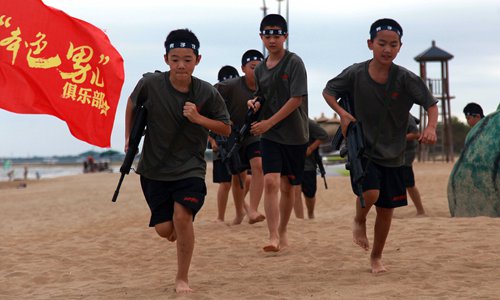 Young trainees from the Boys' Club attend an outdoor activity in Qinhuangdao during the 2018 summer camp. (Photo: Global Times/Courtesy of Boys' Club)

In the six years since it has been established, the Boys' Club has accepted about 20,000 boys aged from 5 to 12, whose parents pin their hopes on the training to help their children to overcome problems of being lazy, acting cowardly, obesity or crying too frequently.The military-like training offered by the institute that is only open to boys also aims to change a lack of masculinity or "being too feminine."Tang Haiyan, the founder of the institute, told the Global Times that boys should shoulder responsibilities, harbor the ability to deal with emergencies and have a strong physique. Nowadays, men do not look like men, he insists.An introduction of the curriculum of the school reads, "It has become a common phenomenon among teenagers that boys are vulnerable. The class cadres and top student spots are mostly filled by girls. Boys have become less confident, not assertive, lack ability and even have no dreams." Zhao, a mother of a 9-year-old child, sent her boy to the institute to play American football and other rugged activities almost every weekend and during every summer or winter holiday since 2016.She told the Global Times that her boy has become more independent and knows how to take good care of himself more than before. "Unless he is sick, he never skips any activities of the training center."She said that appearance should not be the primary way to judge a person. A boy should most importantly have strong and masculine characteristics. The health of the body should always take priority, she said."Some parents wish to make their boys healthier after training. Some send their children to correct their bad habits. And some want to save their boys from giving up hope," Tang said.Many other parents also applaud the training at the institute, thanking the teachers for helping their children undergo dramatic changes. They say the boys change from being tender to being full of masculinity after attending a series of activities at the institute, which cost thousands of yuan in tuition fees. In training sessions, the boys are usually given with military-like lessons based on a strict timetable.They adopt the poses of soldiers, make their own beds, sing military songs and attend activities such as wresting, tug of war, martial arts and American football.'Declaration of manhood'Boys attend the activities on their own without the companion of their parents. They are asked to read a "declaration of manhood" before classes begin. It says:  A man should safeguard his nation, honor and dreams. A man should be confident, diligent and make efforts to be sincere and kind. A man should control his emotions, language and behavior. A man must have success, applause and glory. Tang believes his institute offers a masculine education that most Chinese boys lack. At home, the mother is usually the one who spends most of the time with the kids and raises them. At schools, most teachers are women.Tang only hires male teachers for his institute, who he believes can act as male role models for the boys.Tang said China's exam-oriented education has also ignored gender differences, as it only requires students to seek high scores.Respect differencesThe Xinhua News Agency had released a commentary blasting the effeminate idols, while the People's Daily released a commentary to encourage the public to tolerate different aesthetic choices."Deliberately asking children to attend the class could result in the opposite outcome such as rebellion. A good habit takes a long time to form. This cannot be done with short-term training," a mother of a 7-year-old boy, surnamed Liu, told the Global Times. Peng Xiaohui, a sexologist at Central China Normal University, told the Global Times that Chinese people should view the phenomenon of man lacking of masculinity or being effeminate in a larger picture. "We respect differences of personality. A lack of masculinity, if it is one person's characteristic, should not be criticized," Peng said.