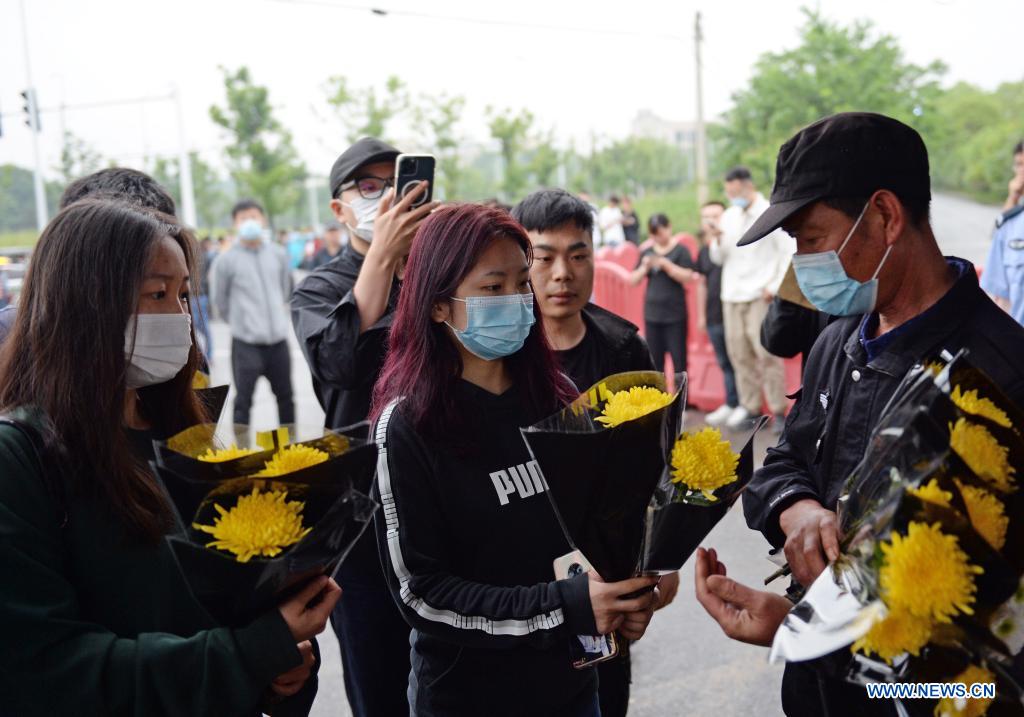 CHANGSHA, May 23 (Xinhua) -- The passing of Chinese scientist Yuan Longping, dubbed "the father of hybrid rice," set off an outpour of mourning, gratitude and remembrance among the Chinese public on Saturday.

Yuan, a household name in China, dedicated his life to reducing hunger and helped feed the world's most populous country and beyond. In 2019, Yuan was awarded the Medal of the Republic, China's highest state honor, for his prominent contributions.

On China's Twitter-like platform Sina Weibo, the news of Yuan's passing has been viewed billions of times so far, with netizens from all walks of life expressing grief for the loss of a national hero.

"Three times a day, when we enjoy the fragrance of rice, you will be dearly remembered," read a posted comment that has been liked more than 700,000 times. 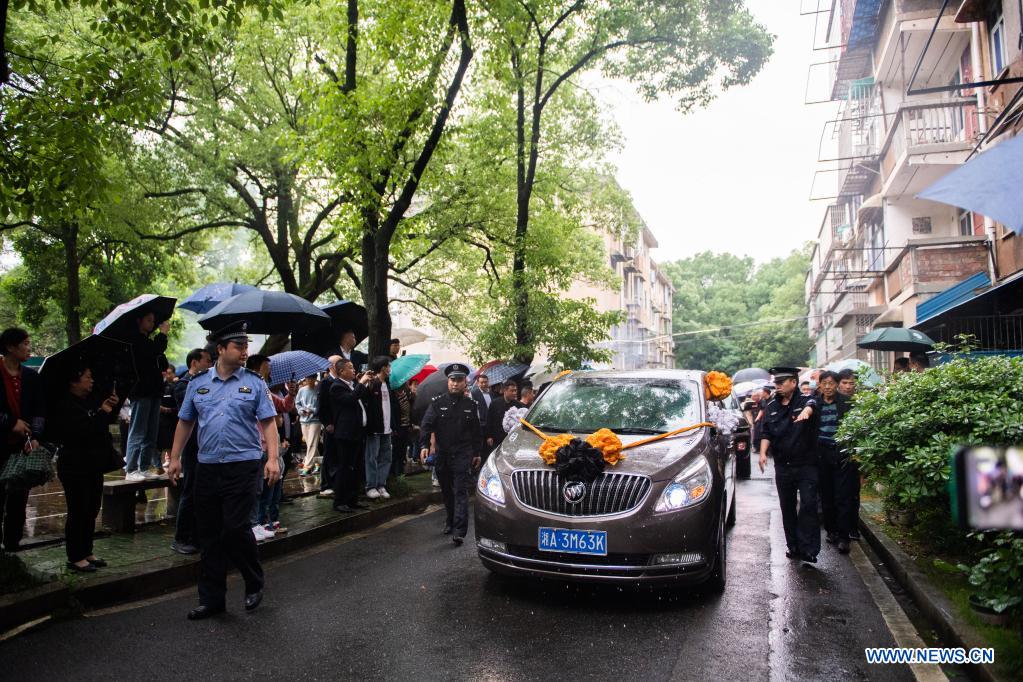 In China, the academician with the Chinese Academy of Engineering is a scientist deeply respected by the people, and also the beloved Grandpa Yuan, whose amiable and humorous personality garnered a lot of young fans.

The top rice scientist died of organ failure at age 91 on Saturday in a hospital in Changsha, capital of Hunan Province.

Many people in Changsha bade farewell to Yuan on Saturday afternoon as the hearse slowly drove out of the Xiangya Hospital of Central South University at around 4 p.m..

"Rest in peace, Grandpa Yuan!" People lining up the sidewalks, braving rains, chanted repeatedly. Some of them kept running with the hearse, while passing vehicles all stopped and constantly honked horns to pay tribute.

"When my father told me today that Grandpa Yuan's passed away, I couldn't help crying," said 12-year-old Li Yuexin, who's always been proud of living in the same city as Yuan did.

"I want to tell Grandpa Yuan that when the wind blows through paddy fields across China, we will think of you!" she added.

Le Thi Huong, a student from Vietnam at the Central South University, is saddened by the news of Yuan's passing. "Yuan Longping's hybrid rice has also been planted on a large scale in my home country, which has also brought food security to us," she said in tears. "He is a scientist who has benefited many people in the world." 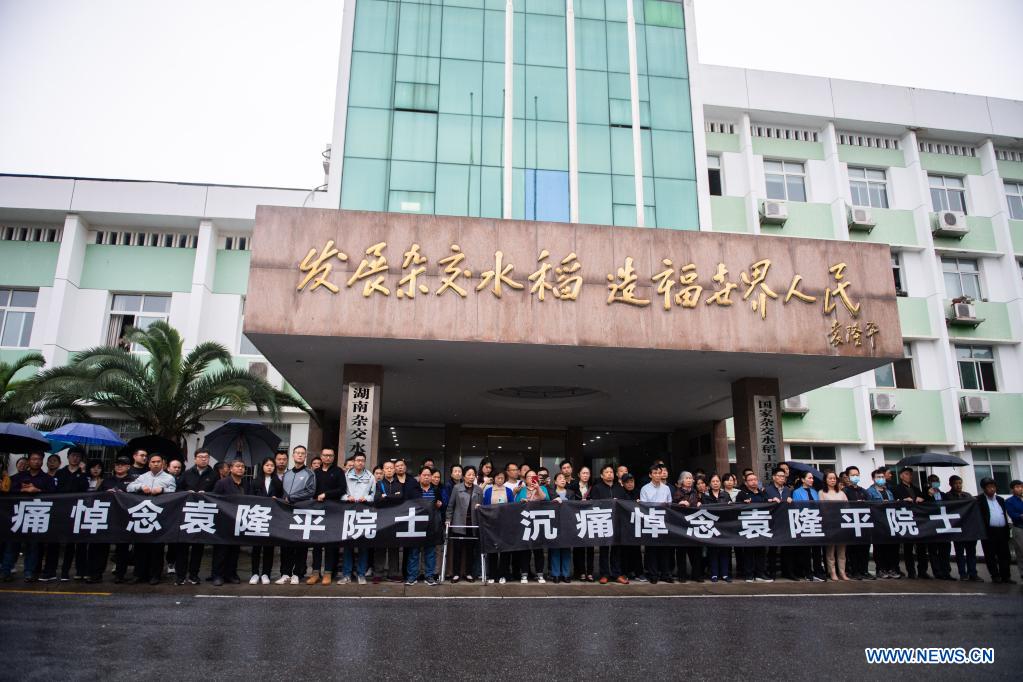 On its way to the funeral home, the hearse made a detour to the Hunan Hybrid Rice Research Center located in Changsha, as Yuan's family wished he could for the last time be near his workplace, colleagues and students.

"Yuan Longping has left us precious legacy," the research center wrote in a eulogy posted on its official website, whose homepage turned black-and-white on Saturday, adding that "his name will be engraved on the vast field and printed on the hearts of the people."

Yuan once said he had two dreams -- to "enjoy the cool under the rice crops taller than men," and that hybrid rice would be grown all over the world to help solve the global food scarcity.

"We will turn our grief into strength, and carry on his unfinished cause," the eulogy read.

"A few words will suffice to remark on Yuan's achievements: he helped the world fend off hunger," said Hu Peisong, director-general of the China National Rice Research Institute.

Qu Dongyu, director-general of the Food and Agriculture Organization of the United Nations, honored Yuan's life on Twitter on Saturday.

"He devoted his life to the research of hybrid rice, helping billions achieve food security," he wrote. "You were my inspiration. May you rest in peace."

China's Ministry of Agriculture and Rural Affairs said in a statement that the agronomist's death is a great loss to the country's agriculture.

The ministry noted that Yuan's noble spirit and character will be carried forward, and vowed to firmly take the initiative in food security.

Similar sentiments have also been expressed on the passing of Wu Mengchao, a top hepatobiliary surgeon and an academician with the Chinese Academy of Sciences.

Wu passed away on Saturday in Shanghai.

"It's so sad to see our country lose two great stars of science on the same day," one netizen wrote on Weibo and many agreed.

Some pointed out that Yuan and Wu each had one minor planet named after them to honor their contributions.

A verse was widely quoted and shared on China's social media. "They are the bravest men, protecting China's food security and the health of the people; they are the brightest stars, guiding people on their way ahead."