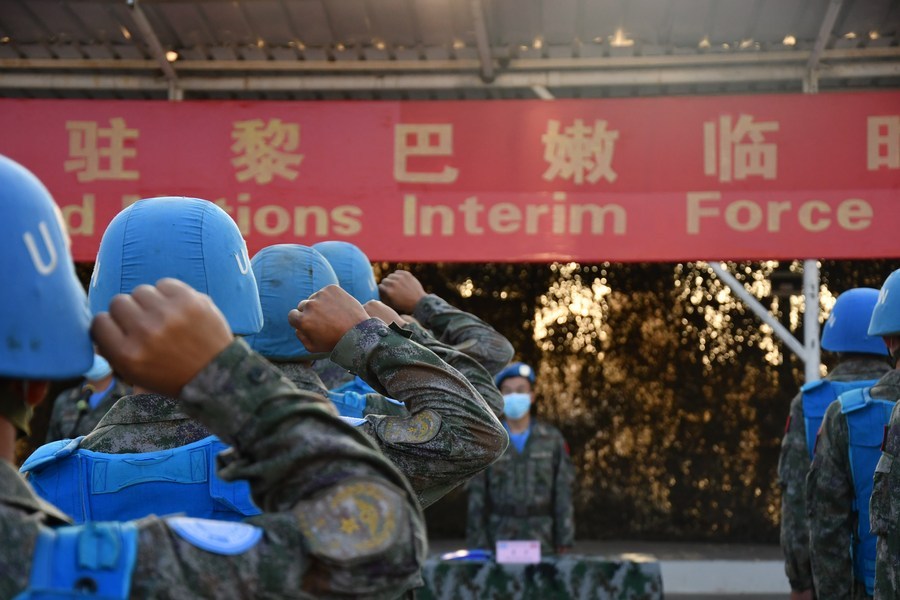 Chinese peacekeepers in Lebanon take an oath before heading to Beirut at the Chinese troops' camp in Hanniyah village in southern Lebanon, on Sept 26, 2020. (Photo: Xinhua)

BEIRUT - The first batch of 20 Chinese peacekeepers to Lebanon arrived in Beirut on Sunday for the UN mission to clean up and reconstruct the Lebanese capital after huge explosions swept through its port in early August.

The second batch of 21 peacekeepers from China's 19th batch of peacekeeping multi-functional engineer detachment will arrive in Beirut on Tuesday.

Before arrival, the Chinese peacekeeping forces had been to Beirut three times for mission surveys, while preparing measures for the prevention and control of the COVID-19 pandemic.

For the mission under the command of the UN Interim Force in Lebanon (UNIFIL), the Chinese peacekeepers are mainly responsible for the cleanup of materials in the port, the office building of the Lebanese Foreign Ministry and the urban streets, as well as the removal of damaged warehouses.

Du Jia, commander of the 19th batch of Chinese peacekeeping forces to Lebanon, said Chinese officers and soldiers will work with their counterparts at UNIFIL to play an important role in promoting the reconstruction of the area of the port and helping restore the order of local production.