CHINA Chinese people among most willing to be inoculated: Ipsos poll

Chinese people among most willing to be inoculated: Ipsos poll 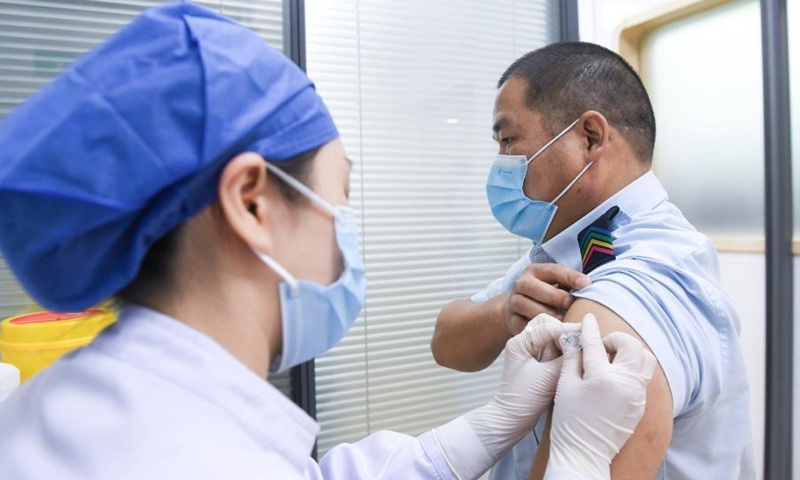 A nurse administers the second dose of COVID-19 vaccine to a driver of the Shenzhen Bus Group Co., Ltd. at the health service center of the Xiameilin community in Futian District, Shenzhen, south China's Guangdong Province, Jan. 24, 2021. (Xinhua/Mao Siqian)

Chinese citizens are among those most enthusiastic to be vaccinated against COVID-19 pandemic across 15 major countries, according to an Ipsos survey released recently.

Meanwhile, 38 percent of Chinese respondents affirmed that they "strongly agree" with the vaccination if available, while 45 percent of respondents said they "somewhat agree." Chinese citizens had the lowest rate of "strongly disagree" in the poll, at 3 percent.

The willingness to get vaccinated right away is not as strong as in the UK and Brazil, given that the outbreak in China is not severe. Only 23 percent of Chinese respondents said they would get it right away, compared with more than 60 percent of respondents in both Brazil and Britain.

The poll was based on data collected from more than 9,300 people aged 16-74 in 15 countries, with the samples from developing countries coming from the more educated and urban populations.

"Initial hesitancy among the public about getting vaccinated is rapidly transitioning to a growing demand for immediacy and a global stampede for access to vaccines is gaining speed," the Ipsos said in an article released on Monday.

In a World Economic Forum-Ipsos survey released in late December, China ranks the top of most willing to be vaccinated, with 80 percent of respondents saying they "agree." Brazil, which has a partnership with China's vaccine manufacturer Sinovac, ranked No. 2 in December's survey with 78 percent of respondents expressing their willingness to take the vaccination.

Ipsos said its most recent polling shows a remarkable increase in willingness to get the vaccine, noting that the January results exclude those who indicate that they have received either one or both doses, which tops out at 13 percent among respondents from China, followed by 10 percent in the US.

Russia, South Africa, France, the US and Japan are the five countries with the least enthusiasm for vaccination in the poll.

People's concerns over the speed at which new vaccines have been approved and potential health risks were an honest, logical reaction to an information and experience deficit, Ipsos said. "We simply didn't know what we needed to know to make the decision to get vaccinated."

A total of 68.1 million doses in 56 countries have been administered, with 3.44 million shots are given per day, according to Bloomberg, while 23.5 million shots have been recorded in the US so far.