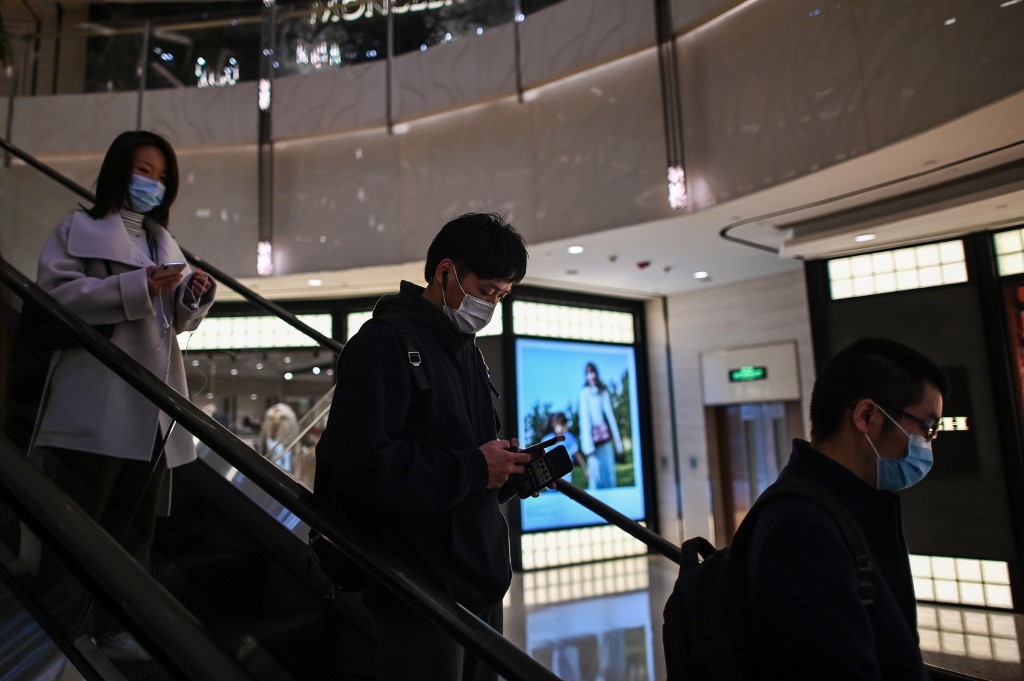 People wearing facemasks as a preventive measure against the Covid-19 coronavirus use a mechanic escaltor at a shopping mall in the financial district of Lujiazu in Shanghai on November 9, 2020. (Photo: AFP)

BEIJING, Dec. 31 (Xinhua) -- Zhang Shuo, a 27-year-old nurse in north China's Tianjin Municipality, believes that 2020 was when she finally stepped up as an adult.

For the next 52 days, she would be shuffling through isolation wards fitted head-to-toe with a hazmat suit, an N-95 mask, gloves, goggles and even a diaper, as using the toilet was a luxury.

When eight of her patients recovered and were discharged from the hospital in the second week, Zhang was overwhelmed by a sense of achievement, feeling like a warrior in the fight against the epidemic.

The memories of COVID-19 may be harsh. However, like Zhang, many Chinese have seen unexpected changes take place in themselves and their lifestyles, bravely embracing these changes with a new mentality toward life.

After taking four months of online courses at home, 12-year-old Cai Haolin in Beijing graduated from elementary school this summer in a virtual ceremony.

During the epidemic, he spent more time with his parents, who were also working from home. "We cooked, baked and read together. I feel we've become closer than ever," he said.

He has also learned to treasure the opportunities of face-to-face communication with his classmates and teachers, which he once took for granted.

The epidemic also promoted the digitalization of people's daily routines.

Using a smartphone is not an easy task for most elderly people. "I need my glasses to read the words on the screen clearly," 65-year-old Wang said. "I also need to double-check the expenses and delivery address before checkout."

Wang gradually gained confidence after making dozens of successful purchases and has become a veteran online shopper, something he could not have imagined a year ago.

Aside from shoppers gaining new skills, business people introduced new marketing methods. Deng Hongbo, 40, spent most of this year in front of a camera selling home appliances to wholesale dealers through livestreaming.

Deng works at a commodity trading center in Wuhan. Now, over 80 percent of merchants in the commodity center have become "live show anchors," said Dong.

According to a report released by the China Internet Network Information Center, e-commerce livestreaming became one of the country's fastest-growing internet applications in the first half of 2020, with over 400,000 livestreamers active in the industry, attracting over 50 billion views.

Also on the rise is Chinese people's awareness of public health and sanitation. Wearing a mask and carefully washing hands have become daily habits, and certain dishes have been removed from restaurant menus.

People have started to reject some traditions that are now deemed not healthy enough. Jiang Zijie, who owns a popular restaurant in Tianjin, has found recently that more and more customers, especially young people, are asking for serving chopsticks and spoons.

Jiang's restaurant has also prepared hand sanitizer and alcohol pads for customers, and the scanning of people's health codes is mandatory for indoor dining.

Zhang Baoyi, head of the Institute of Sociology of the Tianjin Municipal Academy of Social Sciences, said Chinese people accepted various changes amid the epidemic, actively adjusted their lifestyles and have become ever more confident in their life and future.

"Faced with a series of new challenges and new opportunities brought about by the epidemic, Chinese people are positive and optimistic on the whole," Zhang said.