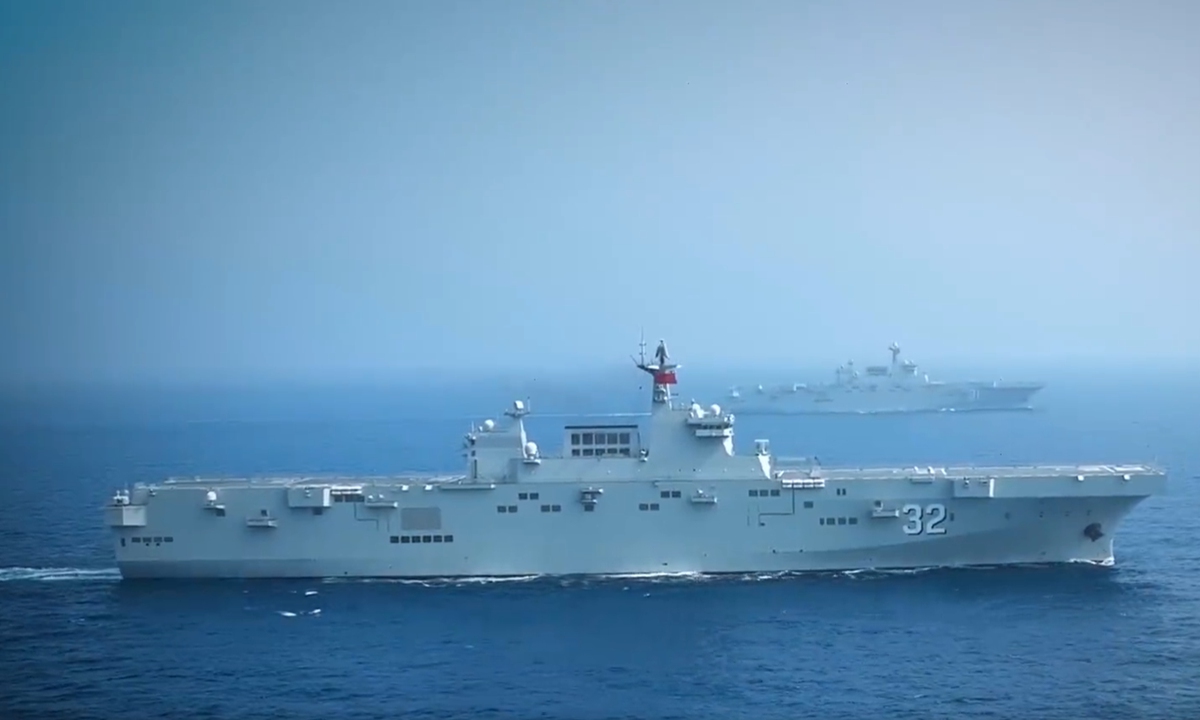 Two Type 075 amphibious assault ships of PLA Navy, the Guangxi and the Hainan, sail in formation at an undisclosed sea region in 2022. (Photo: Screenshot of a video released by the PLA Navy)

Starting the training test, Z-8C transport helicopters carrying marines took off from the flight deck of the Hainan first, as Type 726 air-cushioned landing craft and Type 05 amphibious armored vehicles were released from the well deck of the Hainan and the Guangxi, commencing a beach assault, according to the CCTV report.

During the test, the helicopters were required to take off and land at different landing positions. The helicopters and the air-cushioned landing craft also completed personnel transfer and refueling tests, the report said.

"The consecutive release and retrieval of helicopters and air-cushioned landing craft is a key combat capability of an amphibious assault ship… And the vessel's comprehensive combat capability has received a great boost," Captain Yu Haibo, the executive officer of the Hainan, was quoted as saying.

The full training acceptance test shows that both the Hainan and the Guangxi are now combat ready, and that the PLA Navy can deploy two amphibious assault ships in an amphibious transport group, a Chinese military expert who requested anonymity told the Global Times on Sunday.

In May, a video released by the PLA Navy for the first time featured a scene where the Hainan and the Guangxi sailed together in dual ship drills.

By having two amphibious assault ships forming a dual vessel group, the PLA Navy can double the force in landing missions, which is very practical in combat, the expert said.

Since the Hainan and the Guangxi are affiliated with two different theater commands, their combination also displays a high level of joint operation capability of the PLA, the expert said.