A suspect was returned to China from overseas recently as a campaign to capture economic fugitives continues, according to the Ministry of Public Security.

When the suspect, who was identified by his family name as Chen only, was chairman of the board of a pharmaceutical company in east China's Shandong Province, he allegedly faked more than 100,000 invoices from 2012 to 2013, causing losses in tax revenues amounting to over 170 million yuan (about 27 million U.S. dollars), said the ministry. 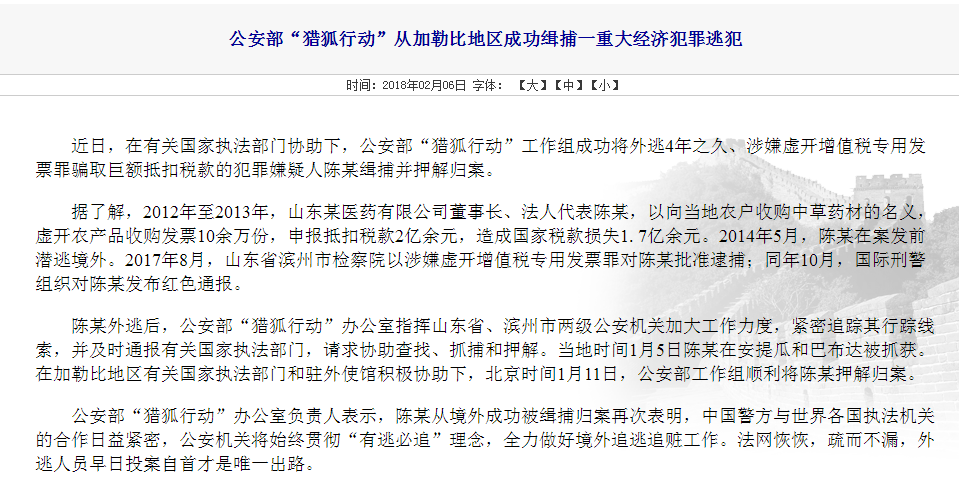 A screenshot of the Chinese Ministry of Public Security anouncement of the arrest of the suspect (Photo:mps.gov.cn)

According to the police, the suspect fled overseas before the Municipal People's Procuratorate of Binzhou approved his arrest on charges of invoice fraud in August 2017. Chen was listed on an Interpol red notice in October 2017.
The suspect was arrested in Antigua and Barbuda on Jan. 5 during the "Fox Hunt" campaign, the ministry said.
Chinese police have been working closely with law enforcement departments overseas and will spare no effort to hunt down fugitives fleeing across the border, the ministry said.
The Fox Hunt campaign targets economic suspects, corrupt Party members and government officials who have fled overseas.