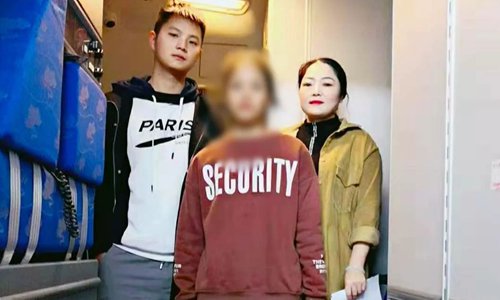 Police in Central China's Hubei Province has rescued and sent home a 13-year-old Cambodian girl after she was smuggled into China and forced to "marry" two men who were abusing her.

The girl, Rin Mani, told police in Yangxin county she had been smuggled into China in February by a Cambodian woman from her hometown who said she would help her find a good husband and job in China, the Beijing News reported Monday.

Rin was tricked into "marrying" her first "husband" and lived in the man's home for six months. The man and his family physically abused Rin until she ran away, according to the report.

A friend Rin made online introduced her to a second "husband." The man took Rin's mobile phone away and also abused her until she escaped a month later.

Yangxin residents notified the police on October 8 when Rin asked them for help, but they could not understand her language.

Rin said she knew very little about the two "husbands" including where they lived. She said that she "hoped to go home as early as possible; they must be worried about me."

Yangxin authorities sent Rin home after confirming her identification with immigration officials and the Cambodian Embassy in China.

Rin's story emerged shortly after the Essex lorry tragedy, where 39 Vietnamese died while being smuggled into Britain, and sparked widespread discussion on Chinese social media about human trafficking.

Chinese netizens have called for a thorough investigation and to punish the human smuggler and the "husbands."

"She is only 13-years-old. Were the two male suspects raping a juvenile?" asked one netizen.