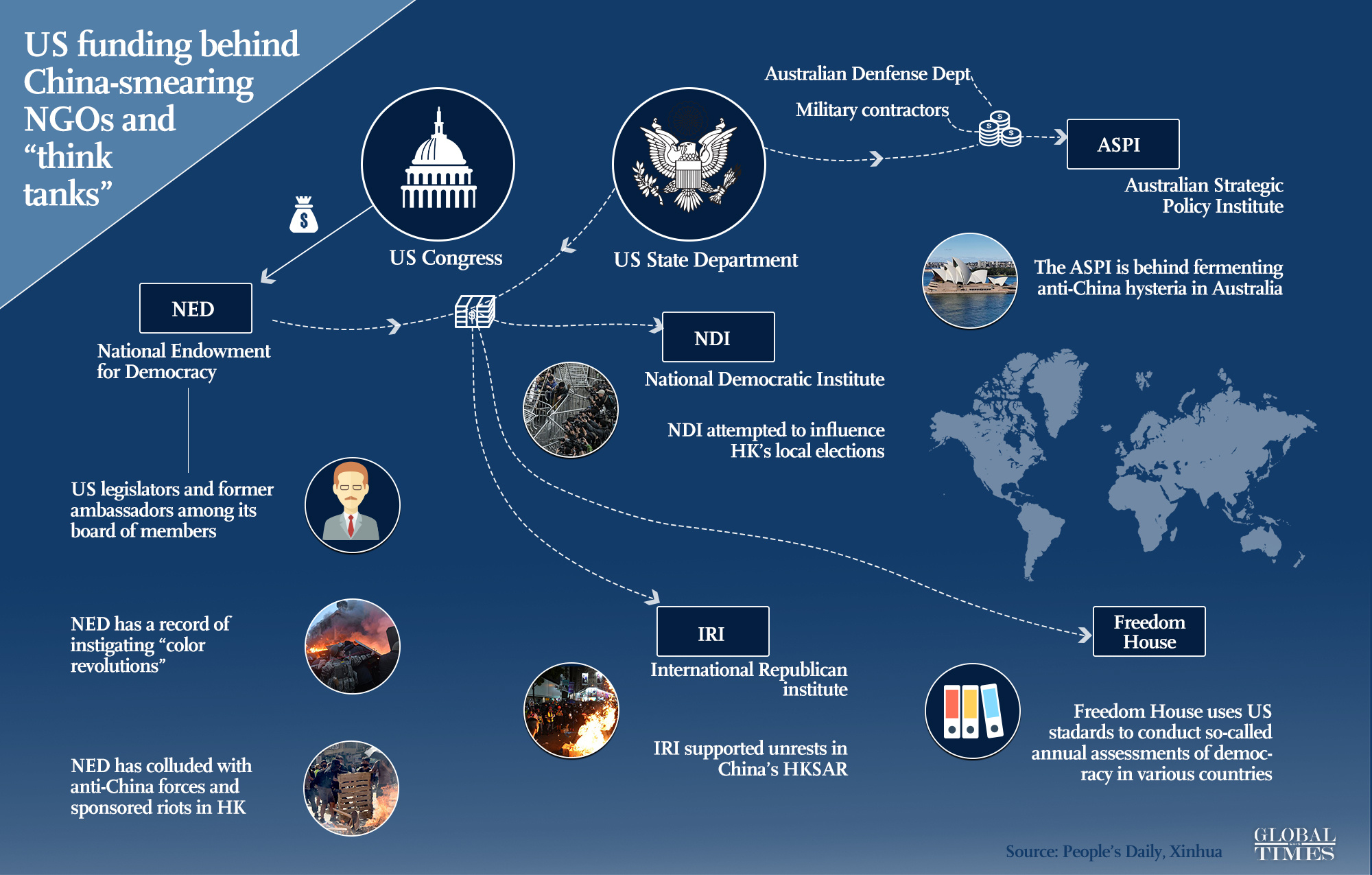 While US Secretary of State Mike Pompeo calls for vigilance over think tanks he believes are "tainted by the machinations" of foreign governments, he turns blind eye to the fact that the US is the world's worst when it comes to interfering in other countries' internal affairs by funding think tanks to do its bidding, experts said.

Chinese Foreign Ministry Spokesperson Hua Chunying on Wednesday mocked US hypocrisy on her Twitter account after the Trump administration demanded international think tanks in the US to publicly disclose the funding they receive from foreign governments or risk being forbidden from engaging with the State Department.

Pompeo said the decision comes amid growing bipartisan concern about the role of outside governments, such as China and Russia, who "seek to exert influence over US foreign policy through lobbyists, external experts, and think tanks."

"Great! We'd very much like to see the US lead the way. How about the US government goes first: How many think tanks has it sponsored? How many of them have been instructed to make and spread fake news and disinformation about targeted countries such as China? How much money has the US government poured into the National Endowment for Democracy to enable it to create instability in other countries in the name of democracy? Can Secretary Pompeo explain?" Hua questioned.

"The purpose is simple: to promote objective and impartial information exchange, untainted by the vicious intention to use think tanks as a political tool and cause turmoil," Hua said, mimicking Pompeo's tone.

The US government's approach is akin to a thief crying "stop thief," as the US is always the top sponsor for many think tanks both domestic and overseas, said Shen Yi, a professor at the School of International Relations and Public Affairs of Fudan University. "US' request for funding disclosure is tantamount to launching McCarthyism again to suppress academic institutions that advocate rational and moderate communication and understanding of China," Shen said.

Some US-funded think tanks have played a disgraceful role in pushing for regime change, bringing global turmoil, interfering in other countries' internal affairs, and cooperating with other anti-China forces to contain China, that include fabricating sources and baseless conclusions about China's Xinjiang Uygur Autonomous Region, Tibet Autonomous Region and the Taiwan question, said observers.

In September 2019 China announced sanctions on a number of US-funded institutions that have "great responsibility for the chaos in Hong Kong," including the National Endowment for Democracy (NED), International Republican Institute (IRI), Freedom House, National Democratic Institute for International Affairs (NDI) and Human Rights Watch. They are among the most influential in Washington and often make irresponsible remarks on the internal affairs of other countries.

Founded in 1983, the NED offers more than 1,600 grants each year to support the projects of nongovernmental groups abroad that are working for so-called "democratic goals" in more than 90 countries and regions, with its funding mainly from the US Congress.

According to NED's own data, it spent more than $1.16 million in Hong Kong from 2016 to 2018. A majority of its sponsorships went to Solidarity Center and National Democratic Institute for International Affairs, which NED refers to as core grantees.

Founded in 1941 to oppose communism in Europe, Freedom House works as a think tank for the US Department of Defense and is closely linked to the Busch family. Around 80 percent of its funds are from the US government and it works for US authorities, according to an article published in 2005 in a journal affiliated to China Institutes of Contemporary International Relations.

Australian Strategic Policy Institute  (ASPI), which is funded by the Australian Department of Defence, has also been repeatedly criticized of agitating anti-China hysteria, to cater to its benefactors.

Funded by the US Agency for International Development (USAID), a federal government organ that promotes US foreign policies, the Stimson Center established a platform for multi-field research in the Mekong River Basin and repeatedly lambasted China and provoked tensions among China and riparian countries in media interviews.

With its academic credibility strongly challenged, these research groups have come under fire for their obvious ideological bias.

US anxiety over foreign elements in its academic, research and cultural institutions is on the rise leading it to label Chinese state media and the Confucius Institute centers in the US as being Chinese missions, observers said.

Chinese Foreign Ministry Spokesperson Zhao Lijian said US restrictions, disruptions and suppression of China-US exchanges exposes the faded confidence of the US.

Peng Weibu, professor at Jinan University in Guangzhou and expert on American think tanks said the US government's assertion that Chinese think tanks interfere in US internal affairs is an attempt to politicize normal  and friendly Sino-US exchanges. "Chinese academic institutions have no similar intention as the US government. Such groundless and untenable slander is actually a brutal interference in academic communications, which undermines the fair development of academic cooperation between the two countries," he said.

Peng noted that in many cases, the US government and some political think tanks rely on each other to deliver American values and ideology.

The think tanks serve as a tool to lobby some governments to adopt policies that often reflect US priorities through policy analysis, Peng said.

Peng indicated that the coronavirus pandemic has stopped many China-US exchanges, but many US-based think tanks continue their reports on China without any real field research or actual observation.

US think tanks are meant to be neutral and objective, but nowadays the think tanks become a tool to serve US politicians and diplomatic interests via touting biased conclusions or even irrational views, Shen noted, explaining that it is partly due to the current US administration that eschews science and truth.

"If China were to follow Pempeo's logic and request the financial details of all the US-backed institutes, it  would only embarrass  Washington," Shen said.

There are still respectable think tanks that objectively and fairly interpret a complex China based on their interaction with Chinese officials and people. If the US imposes further restrictions on think tanks, it will completely cut off an important channel for communication between China and the US, Shen warned.