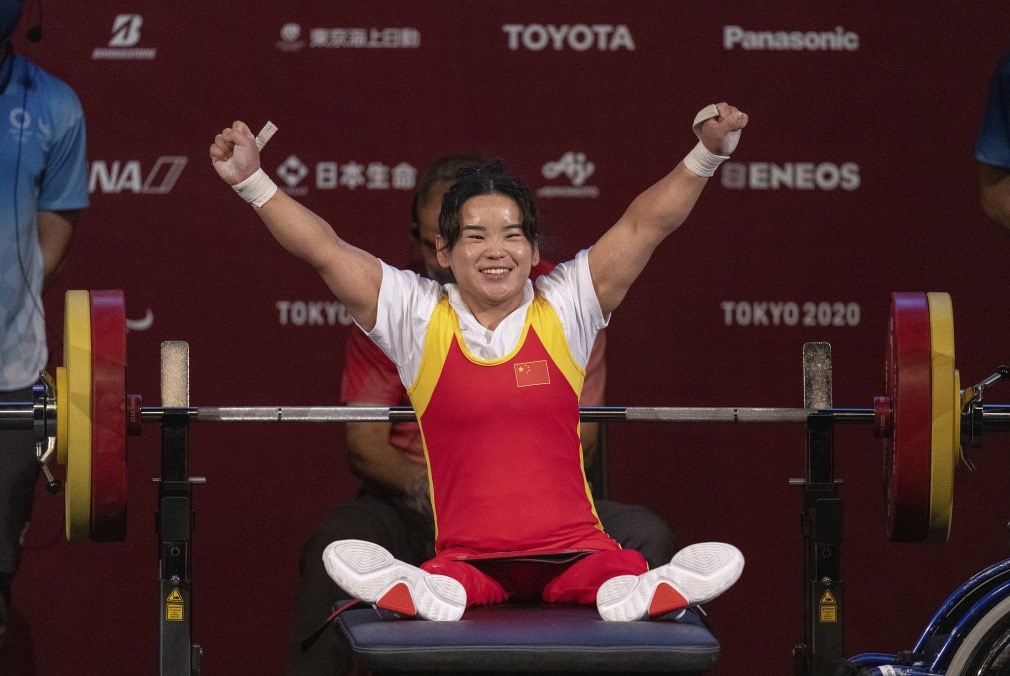 At the Tokyo International Forum, Guo, in her debut at the Paralympics, successfully lifted 105kg in her first attempt, shattering the previous Paralympic record of 104kg.

In her second attempt, the Chinese powerlifter started to challenge her own world record of 107kg but failed to hoist 108kg. After quick and swift adjustment, she succeeded in her third attempt for a fresh world record, which did not stop her from pursuing a higher target.

Guo applied for a fourth attempt, which would not count for this match according to Paralympic rules, and astonishingly lifted 109kg, refreshing the world record once again.

Ni Nengah Widiasih from Indonesia won the silver with 98kg while Clara Fuentes from Venezuela bagged the bronze.

"I have prepared for two years for the Tokyo Paralympics, and winning a Paralympic gold medal has been my dream. I feel elated to be able to make my dream come true," she told Xinhua.

In the women's 45-kg competition, Chinese veteran Cui Zhe, who was competing in the Paralympics for the fourth time since Beijing 2008, won the silver with 102kg, five kilos short of gold medalist Latifat Tijani of Nigeria and Justyna Kozdryk from Poland won the bronze with 101kg.

"It is a little bit regrettable that I was not able to win a gold medal, but I am quite satisfied with my performance today considering my health condition is not very good. So, I feel that I should say thank you to myself. A gold medal at the Paralympics is my dream, and I will try my best to keep pursuing it," Cui said.

In other events on Thursday, Omar Qarada from Jordan won the men's 49-kg event and David Degtyarev from Kazakhstan claimed the gold in the men's 54-kg.