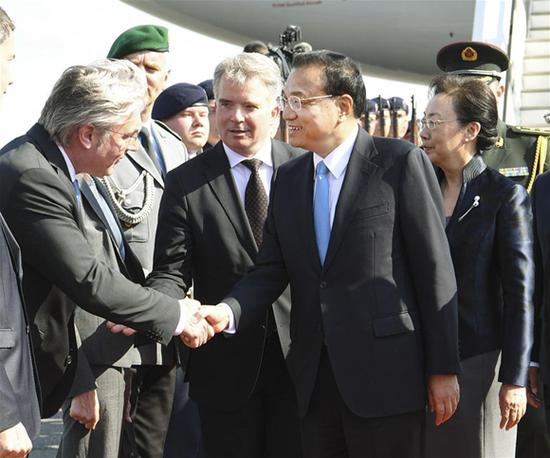 Chinese Premier Li Keqiang arrives in Berlin, capital of Germany, July 8, 2018, for the fifth round of China-Germany intergovernmental consultations and an official visit to the European country. (Xinhua/Gao Jie)

Chinese Premier Li Keqiang arrived here Sunday for the fifth round of China-Germany intergovernmental consultations and an official visit to the European country.

Upon arrival, Li noted that he and German Chancellor Angela Merkel, who visited China in May, has realized an exchange of visits less than half a year after the two countries' new cabinets took office in March.

That fully reflects the sound relations between the two countries and their shared aspiration for closer cooperation, said Li, who is now paying his fourth visit to Germany as Chinese premier.

Noting the intergovernmental consultations serve as the highest-level, largest and most extensive platform of dialogue and exchanges between the two countries, Li said the mechanism plays an important role in coordinating and promoting bilateral cooperation.

Against the backdrop of complex and changing international circumstances, the two new governments should use their first comprehensive meeting to build consensus, deepen cooperation and pursue development, he said.

The two sides, Li added, should jointly map out their future all-round cooperation from a new starting point, so as "to seek benefits for the two countries and peoples, give impetus to China-Europe cooperation, and contribute to safeguarding free trade, multilateralism and a fair and just international order."

During his stay till Tuesday, Li will hold talks with Merkel, and the two leaders will also witness the signing of a series of documents, and attend a forum on China-Germany economic and technological cooperation and a presentation of the two countries' cooperation on autonomous driving.

Since upgrading their ties to an all-dimensional strategic partnership in 2014, the two countries have maintained frequent high-level interactions and extensive exchanges, and deepened their practical cooperation.