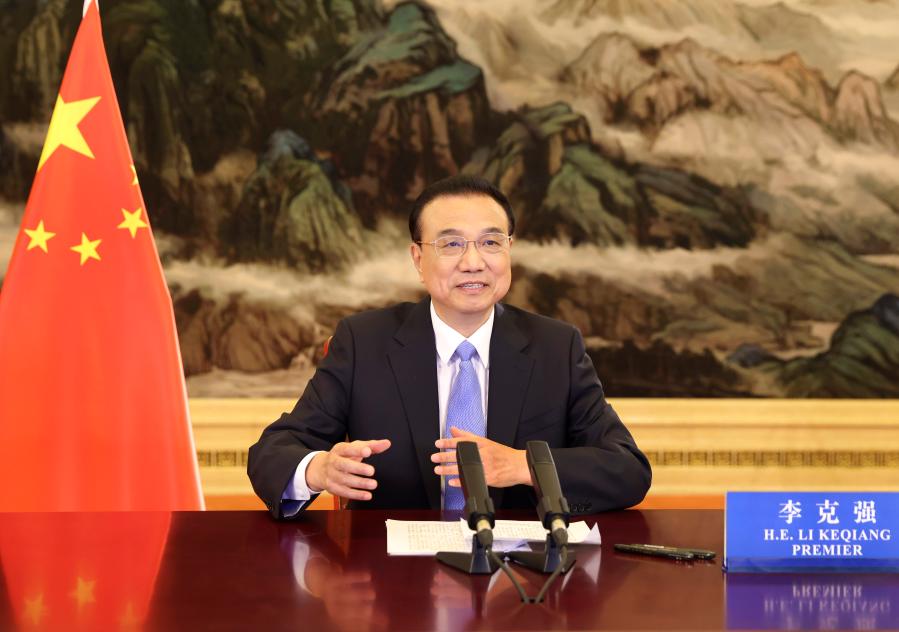 Noting China and the EU are respectively the largest developing country and biggest union of developed countries, Li said a stable China-EU relationship is crucial for world peace, stability and development.

China has always viewed its relations with the EU from a strategic and long-term perspective, and attaches importance to this meeting, Li said.

He stressed that China firmly follows the path of peaceful development, adding China hopes that the two sides will enhance understanding and mutual trust, step up dialogue and communication, deepen practical cooperation, properly address differences and disagreements, and make joint efforts and contributions for world peace and development.

Li also expressed the hope for the meeting to send a signal of steady development of China-EU relations and active pursuit of the bilateral cooperation.

Li stressed that China and the EU are each other's biggest trading partners and important forces for building an open world economy. "Under current circumstances, dialogue and cooperation remain the mainstream of China-EU relations, and mutual benefit the keynote of China-EU cooperation," he said.

Li called on the two sides to build on the existing mechanisms to enhance policy coordination on COVID response, climate change and the digital economy, and foster new cooperation highlights.

He also called on the two sides to work together to safeguard energy and food security, preserve the stability of industrial and supply chains, meet risks and challenges, and promote a sustainable recovery of the world economy.

Pointing out that reform and opening-up is China's fundamental national policy and China's door will open still wider, Li said China will continue to foster a market-oriented and law-based business environment up to international standards, and treat enterprises of all types of ownership as equals.

Li expressed the hope that China and the EU remain open to each other, steadily expand market access, protect fair competition and promote trade and investment liberalization and facilitation.

"China hopes that the EU will also provide a sound business environment to Chinese businesses investing and developing in Europe," Li added.

For their part, Michel and von der Leyen noted that both the EU and China are important members of the multilateral system and China is an important stakeholder.

They expressed the EU's will to engage in close cooperation with China in such areas as COVID response, economy and trade, investment, and protection of geographical indications, and expand cooperation on the digital economy, energy transition, cyber security, humanitarian efforts and climate actions.

The EU looks forward to a successful second part of the 15th meeting of the Conference of the Parties to the Convention on Biological Diversity, they added.

The EU side laid out its views and position on the current situation in Ukraine.

Li stated China's principled position. He stressed that China follows an independent foreign policy of peace, and stands for observing the purposes and principles of the UN Charter, upholding international law and widely-recognized, basic norms governing international relations, including those on sovereignty, territorial integrity and equality between countries different in size, and settling disagreements and conflicts through dialogue and negotiation.

China has been promoting talks for peace in its own way, and will continue to work with the EU and the international community to play a constructive role for early easing of the situation, cessation of hostilities, prevention of a larger-scale humanitarian crisis, and the return of peace at an early date, Li said.

The two sides also had an in-depth exchange of views on other international and regional issues of mutual interest.