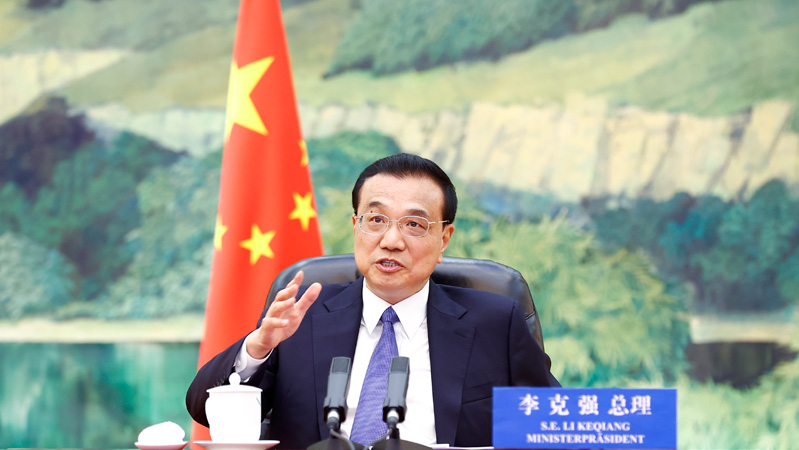 Li said the COVID-19 pandemic has affected Sino-German exchanges and cooperation. However, bilateral cooperation did not and will not stop because of the pandemic, but will continue to advance.

Li said China attaches great importance to Sino-German relations, noting that the leaders of the two countries had a telephone conversation not long ago.

"China is willing to deepen mutual political and strategic trust with Germany based on mutual respect, equality and mutual benefit, maintain dialogue and consultation, promote cooperation in various fields such as economy, trade, investment and technology, and advance bilateral ties for new progress," Li said.

Li introduced China's epidemic prevention and control measures and expressed appreciation for the positive results achieved by Germany's anti-epidemic efforts. He expressed willingness to deepen bilateral exchanges in anti-epidemic experience, and to strengthen cooperation in vaccine and drug research and development.

To achieve economic recovery after the pandemic, China and Germany should jointly safeguard multilateralism and promote trade and investment liberalization and facilitation, said the premier.

"China is further expanding its opening up and is willing to create a sound business environment for foreign companies, including German ones, to operate in China," Li said, calling on the two countries to expand a two-way opening up, make good use of the "fast lane" of personnel exchanges that has been launched to facilitate bilateral business cooperation and the resumption of production, and jointly maintain the safety and stability of supply and industrial chains.

China has always supported the process of European integration and is happy to see the European Union (EU) maintain unity and prosperity, said Li. He stressed that strengthening open China-Germany and China-Europe cooperation is "not an expedient measure, but is in line with each other's common interests and can achieve mutual benefit and win-win results."

As Germany will assume the rotating presidency of the EU in the second half of this year, China hopes Germany will play a positive role in promoting the development of China-EU relations, said the Chinese premier.

Li said China is willing to maintain high-level exchanges and institutional dialogues with Europe. China will also strive to complete the negotiation of the China-EU investment agreement at an early date, and promote cooperation in various fields to achieve positive results.

Merkel said Germany and China have maintained close, high-level communication. China has made great efforts to prevent and control the epidemic, and the two countries have cooperated well in combating the virus.

She said Germany welcomes China's insistence on expanding its opening to the outside world and will continue to work to promote bilateral cooperation in various fields.

Merkel appreciated China's willingness to provide vaccines developed in China as an international public product, and expressed support for strengthening cooperation between the two countries' vaccine research and development institutions.

She said both Germany and China advocate strengthening multilateralism and are willing to further communication and coordination in WTO-related affairs.