Chinese Premier Li Keqiang arrived on Thursday in the Tajik capital city of Dushanbe for an official visit and to attend the 17th meeting of the Council of Heads of Government of the Shanghai Cooperation Organization (SCO).

The trip marks Li's first visit to Tajikistan. Tajik Prime Minister Kohir Rasulzoda led a group of senior government officials to meet Li at the Dushanbe international airport, where a grand welcoming ceremony was held. Local youth in national costumes presented flowers to the Chinese premier and his wife. Then Li, accompanied by Rasulzoda, reviewed the honor guard.

Li said he expects to have in-depth exchange of views with Tajik leaders on deepening bilateral ties and advancing practical cooperation in all areas to let China-Tajikistan friendship bloom and bear more fruits to benefit people of the two countries.

During his visit, Li will meet with Tajik President Emomali Rahmon. He will hold talks with Rasulzoda, jointly meet the press and witness the launch of cooperation projects and the signing of documents.

The 17th meeting of the Council of Heads of Government of the SCO will be held from October 11 to 12. Li is expected to exchange views with SCO leaders, and a joint statement and documents concerning cooperation and development of the SCO are expected to be signed during the meeting. 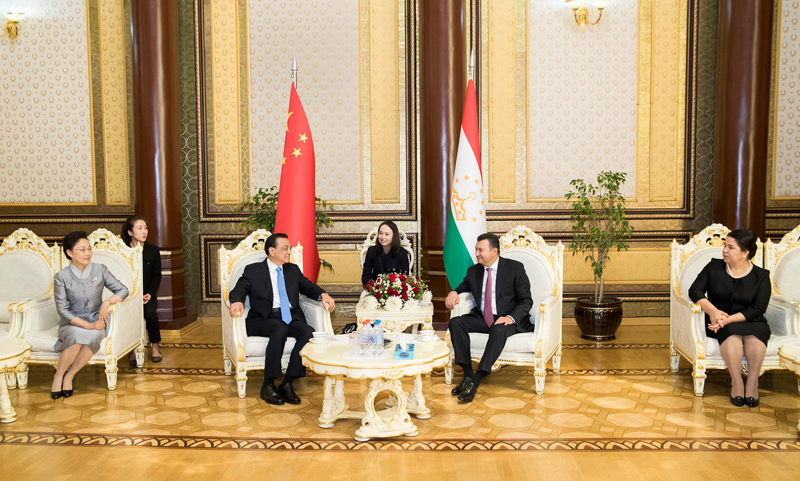 Li said the SCO has played an even more prominent role in helping countries maintain stability, boost economy, and improve people's livelihood at a time when the world is undergoing major development, transformation and adjustment.

China stands ready to work with relevant parties to push the SCO to advance steadily in a time of changes, and to create more benefits for people in the region, Li said.

The SCO was established in 2001 by China, Kazakhstan, Kyrgyzstan, Russia, Tajikistan, and Uzbekistan. India and Pakistan joined as full members in 2017.

After Tajikistan, Li will go on a trip to pay an official visit to the Netherlands, attend the 12th Asia-Europe Meeting (ASEM) summit in Brussels and pay a working visit to Belgium.