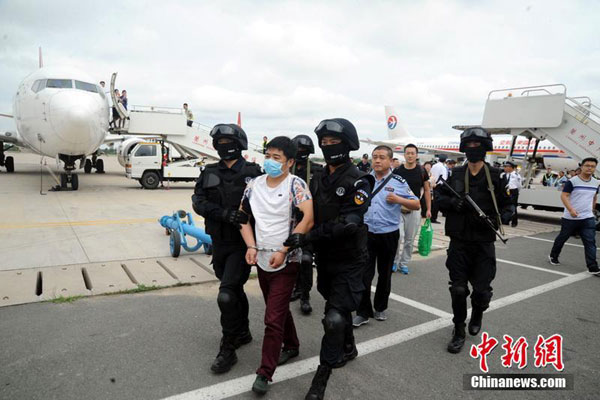 An economic fugitive is repatriated from Vietnam to Lanzhou under police escort on August 26, 2016. (File photo: Chinanews.com)

Li, also a member of the Standing Committee of the Political Bureau of the Communist Party of China (CPC) Central Committee, made the remarks at a State Council meeting on clean governance.

While acknowledging the efforts of government agencies in relevant areas over the past year that have effectively promoted the work in epidemic prevention and control as well as economic and social development, Li said corruption and misconduct still pose challenges in some areas.

He urged consistent efforts to promote clean governance and strengthen anti-corruption in government agencies, and called for measures to give full play to the leading role of strict Party self-governance to ensure that the targets and tasks for economic and social development this year will be accomplished.

Li stressed the implementation of policies such as tax and fee cuts to help market entities recover and gain more vitality. He urged efforts to ensure that the direct allocation of fiscal funds plays a better role in benefiting people and enterprises.

More work should be done to strengthen the oversight of investment in fields related to people's livelihoods, including employment, education, medical care and elderly care, Li said.

The government should tighten its belt and reduce expenditure to allow more funding for people's livelihoods, while deepening reforms to streamline administration and delegate power to further energize market entities and stimulate social creativity, he said.

Li also called on governments at all levels to address practical issues to benefit the public.