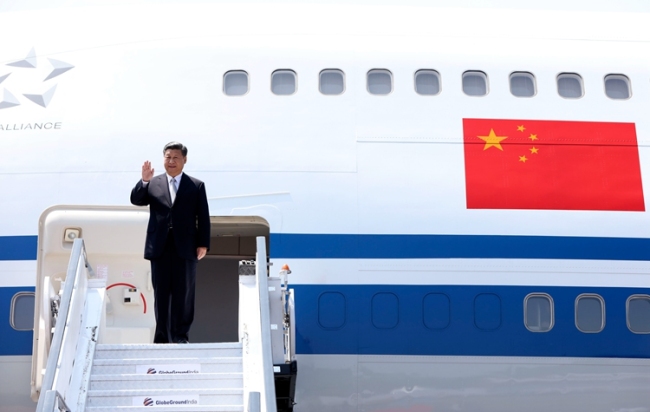 ROME, March 21 (Xinhua) -- Chinese President Xi Jinping arrived in Rome Thursday for a state visit to Italy to map out the future of the bilateral relationship and move it into a new era.

It is the first visit by a Chinese head of state to the European nation in 10 years.

Xi and his wife, Peng Liyuan, were greeted by senior Italian government officials at the airport.

While delivering a written speech upon arrival, Xi said that the China-Italy relations have withstood the test of time and international vicissitudes since the two countries forged diplomatic ties 49 years ago. Chinese President Xi Jinping (L) and his wife Peng Liyuan disembark from the airplane after arriving in Rome, Italy, on March 21, 2019. (Photo: Xinhua)

Upholding the principle of mutual respect, trust and benefit, China and Italy have constantly promoted their friendship and cooperation, setting an example of developing bilateral ties between two countries of different social systems, cultural backgrounds and development stages, Xi said.

The practical cooperation between the two countries has yielded fruitful results, bringing tangible benefits to the two peoples, said Xi, adding that the bilateral cultural and people-to-people exchanges are rich and colorful, and have enhanced mutual understanding and friendship.

The Chinese president noted that he is looking forward to meeting the Italian leaders to jointly draw the blueprint for the future development of bilateral relations.

"I believe with the concerted efforts of both sides, the China-Italy comprehensive strategic partnership will enjoy a better tomorrow," Xi said.

Italy is the first stop of Xi's three-nation Europe tour, which will also take him to Monaco and France.