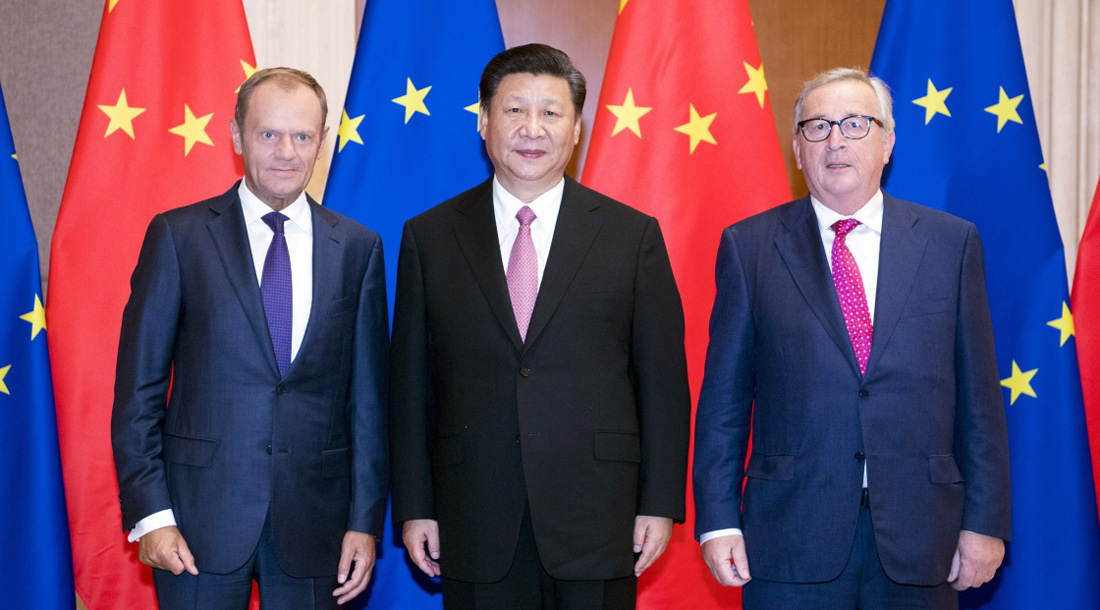 "China and the EU are both builders of world peace, contributors to global development and defenders of the international order," Xi said when meeting with Tusk and Juncker at the Diaoyutai State Guesthouse in Beijing.

Xi said China stands ready to work with the EU on the basis of mutual respect, fairness, justice and win-win cooperation, to make still further progress in the China-EU comprehensive strategic partnership and promote bilateral economic and social development and people's welfare.

Xi noted that the Chinese side would always regard the EU as an important force for stability and development of the international structure. He advocated the two sides stick to the right path of the comprehensive strategic partnership, advance dialogue and cooperation in various areas, tap the potential for economic cooperation, explore new fields and modes for dialogue between the two civilizations, and enhance mutual understanding to lay a solid foundation for the partnership.

The Chinese president stressed that China and the EU should make joint efforts to advance political resolution to international and regional hot-spot problems, and safeguard multilateralism, especially the status and role of the United Nations.

As two major markets and civilizations of today's world, China and Europe should firmly advance their partnership and instil more stability and positive energy into the international community, Xi said.

Pledging more reform and opening-up outcomes, Xi said China and the EU should follow the trend of world multi-polarization and economic globalization, increase strategic communication and coordination, join hands with each other to safeguard multilateralism and the rule-based system of free trade as well as an open world economy, push ahead with trade and investment liberalization and facilitation, improve global governance and promote the cause of peace and development.

Hailing the significance of the EU-China comprehensive strategic cooperation, Tusk and Juncker expressed their gratitude for China's support for European integration.

Both the EU and China are committed to multilateralism, upholding the rule-based international order, handling international relations on the basis of mutual respect, and improving multilateral trade system through multilateral consultations, according to the EU leaders.