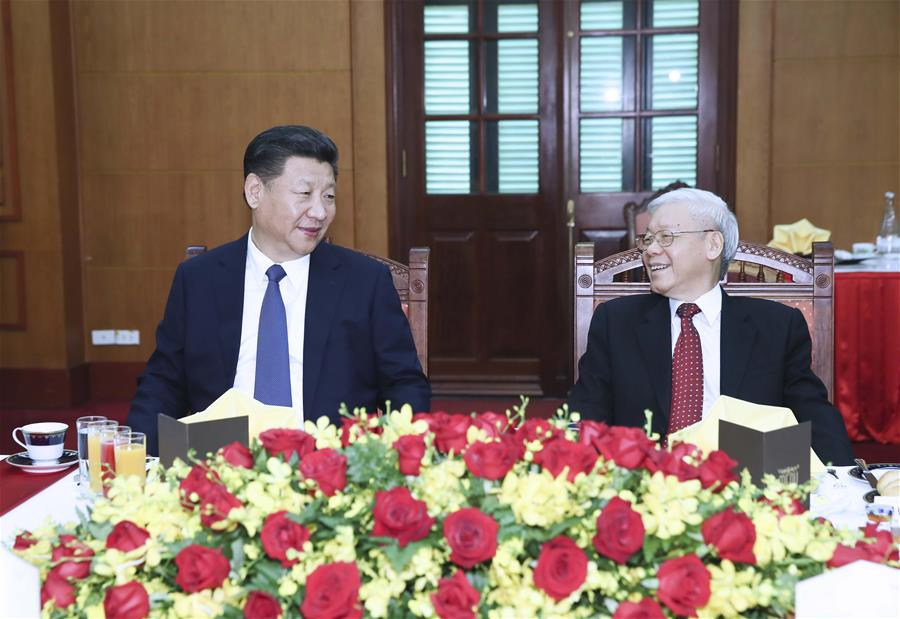 During the meeting with Tran Quoc Vuong, Politburo member and permanent member of the CPV Central Committee's Secretariat, at the Diaoyutai State Guesthouse in Beijing, Xi said that complicated and profound changes are currently taking place concerning the international and regional situation.

Xi, also general secretary of the Central Committee of the Communist Party of China (CPC), said that bilateral ties and the socialist causes of both countries have entered into a new phase of development and face new opportunities and challenges.

Xi said he and Nguyen Phu Trong, general secretary of the CPV Central Committee, again made mutual visits to each other's countries within a year in 2017 and reached a series of important consensus on deepening relations between the two parties and the two countries.

China is glad to see the momentum of the sound development of bilateral ties be consolidated and potential of bilateral cooperation be released, he said.

"We stand ready to work with Vietnam on in-depth conversations on overall and strategic issues and enhance the political guidance on bilateral ties so as to further promote relations," Xi said.

This year marks the 10th anniversary of forging the China-Vietnam comprehensive strategic partnership of cooperation. Hailing the achievements scored in the past 10 years, Xi said China has always viewed the bilateral ties from a strategic height and a long-term perspective.

China is willing to work with Vietnam to make sure bilateral ties forge ahead along the right path under the guidance of the policy of long-term stability, forward-thinking, good-neighborliness and comprehensive cooperation, and the spirit of being good neighbors, friends, comrades and partners, said Xi.

He called on both sides to maintain high-level exchanges, enhance the synergy of development strategies, continue dialogue and consultations, manage differences and consolidate the foundation of people-to-people exchanges.

Xi said the CPC and the CPV share common views on party building. The CPC is willing to further promote exchanges with the CPV and upgrade both sides' governance ability.

Vuong congratulated China on the progress it has made under the leadership of Xi and the CPC Central Committee since the 19th CPC National Congress held last year, and spoke highly of China's contributions to regional and world peace and stability.

It is of great significance at present to cement and deepen relations between the two parties and to remain true to both parties' original aspirations, said Vuong.

Vietnam values its traditional friendship with China, he said, adding that it is the top priority in Vietnam's foreign policy to develop relations with China.

He said Vietnam is willing to work with the party and the government of China to promote the healthy and stable development of the comprehensive strategic partnership of cooperation.