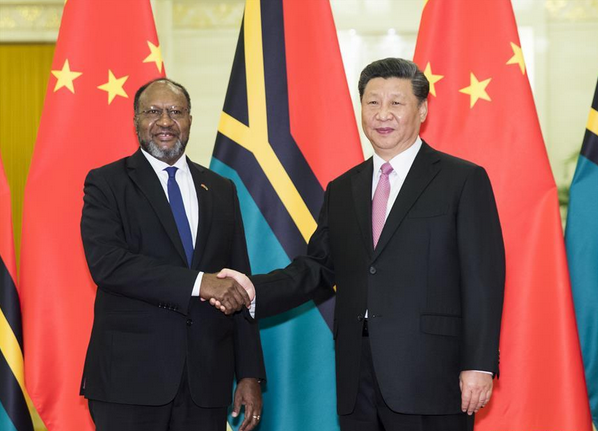 Xi said bilateral ties are in the best time in history, and have been a model of relations between China and Pacific island countries.

China speaks highly of Vanuatu's adherence to the one-China policy and supports Vanuatu to independently choose a development path that suits its own national conditions, Xi said.

He called on the two sides to maintain the momentum of high-level exchanges, expand dialogue between the two countries' political parties and between their legislative institutions, and exchange more experiences in governance, so as to deepen political mutual trust.

"We should take the signing of a cooperation plan on jointly building the Belt and Road as an opportunity to strengthen alignment of development strategies, tap the potential of cooperation and expand pragmatic cooperation in various fields," Xi said.

China is willing to deepen agricultural technology cooperation with Vanuatu, support the development of its competitive industries, and continue to encourage Chinese enterprises to invest in Vanuatu, he said.

China maintains the approach of upholding justice and pursuing shared interests and the principles of sincerity, real results, affinity and good faith to strengthen solidarity and cooperation with Pacific island countries, he said.

Xi stressed China pursues no private interest or so-called "sphere of influence" in Pacific island countries, and will always be their reliable good friend and partner.

Salwai said Vanuatu admires China for its insistence on equal treatment of countries no matter they are big or small, rich or poor, strong or weak, and appreciates China's sincere help to his country according to its actual needs.

He vowed to adhere to the one-China policy, and support Chinese government's efforts in achieving peaceful reunification of the country.

Vanuatu will strengthen cooperation with China on such areas as jointly building the Belt and Road, implementing the UN 2030 Agenda for Sustainable Development, and coping with climate change, he said.

Salwai is paying an official visit to China from May 26 to 31.