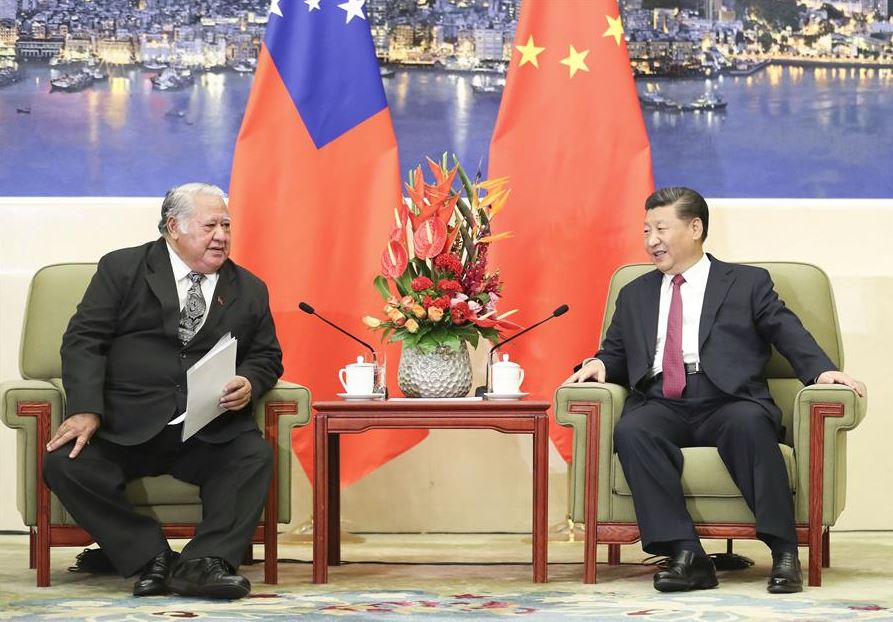 Chinese President Xi Jinping meets with Samoan Prime Minister Tuilaepa Sailele Malielegaoi at the Great Hall of the People in Beijing, capital of China, Sept. 18, 2018. Tuilaepa is in China to attend the Summer Davos Forum in the coastal city of Tianjin. (Photo: Xinhua/Ding Lin)

During the meeting at the Great Hall of the People, Xi voiced his appreciation for Tuilaepa's contribution to the development of China-Samoa ties. The Samoan prime minister is in China to attend the forthcoming Summer Davos Forum in the coastal city of Tianjin.

"Samoa was one of the first Pacific island countries that established diplomatic relations with China," Xi said, noting that the Chinese side cherishes the traditional friendship with Samoa and appreciates the country's firm and long-lasting adherence to the one-China principle.

"China will continue supporting Samoa's efforts to develop the economy and improve people's livelihoods, as well as those to safeguard the legitimate interests of Samoa and other South Pacific island countries in international and regional affairs," said the Chinese president.

Xi said China stands ready to grasp the opportunity of building the Belt and Road to expand practical cooperation with Samoa.

The Chinese side understands and attaches great importance to the special concern of Samoa and other Pacific island countries on climate change and will work together with Samoa and the international community to proactively advance the global process of addressing the problem.

Hailing their mutual trust and friendly relationship based on the one-China principle over the past 43 years since the establishment of the diplomatic relations, Prime Minister Tuilaepa said the Samoan side values the ties with China and is willing to boost people-to-people exchanges as well as trade, investment and tourism cooperation with the Chinese side within the Belt and Road framework.

The Samoan side is appreciative of China's leading role in addressing climate change and will increase cooperation with China in multilateral affairs, said the prime minister.