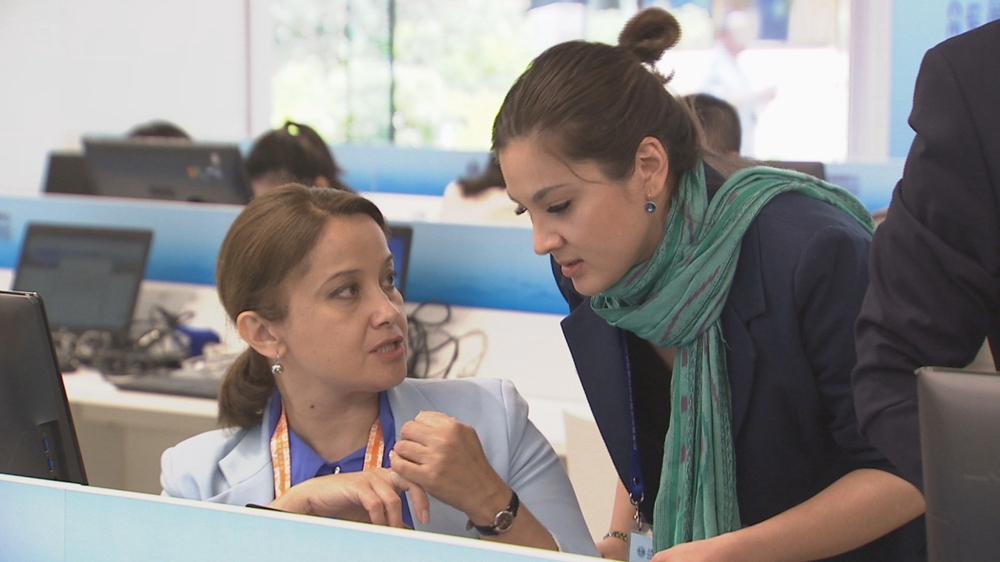 Umarova Yasmina from Uzbekistan talks with an Uzbekistan national media reporter at the media center of the SCO Summit in Qingdao, China, June 10, 2018. (photo: CGTN )

As soon as Xi Jinping began speaking, the room turned silent, all minds focused on what the Chinese president was saying. His words were being translated into multiple languages, while his messages were being spread to almost every corner of the SCO bloc.

One of those present at Xi's speech was Umarova from Uzbekistan, who’s studying for a master’s degree in international relations in Beijing. She was assisting her nation’s journalists this weekend, and she said she fully supported Xi Jinping’s ideas.

“President Xi Jinping has mentioned that the SCO is a great platform for building a world community of  shared future. I think it’s so true. Because the SCO spirit is based on equality and understanding other cultures, and win-win cooperation. The SCO can have its own contribution to world prosperity and betterment of global governance,” said Umarova Yasmina.

Meanwhile, a national security adviser from Afghanistan – one of the observer nations – praised the Chinese president’s vision, particularly when it comes to regional security.

Mohammad Haneef Atmar, National Security Adviser of Afghanistan said, “He (President Xi) is such a visionary leader with clear articulation of his vision, not only for China but also for the region and the community of nations. What he is emphasizing on is shared prosperity, shared security, peace and stability of all nations. We’re particularly grateful of his emphasis of cooperation with Afghanistan for counter terrorism and peace reconciliation.”

Beside those opinions, there were many other viewpoints around the venue. Everybody is interpreting the Chinese president’s words in their own way.

Kumar Gaurav from Asian News International of India says President Xi’s speech is about cooperation of world powers. “It’s impressive particularly when India became a new member of the SCO. India wants connectivity between countries and other partners, and trade relations with all, other thing is counter-terrorism, which our Prime Minister is taking up to the summit. ”

The journalists agreed that President Xi’s speech was an important component of their reports, as it conveyed both the host country and the SCO’s determination to drive towards a new era of peace, prosperity and cooperation within the region.