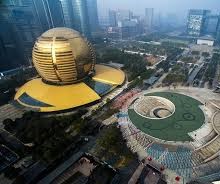 China-Africa Private Sector Cooperation Summit, held Thursday in Hangzhou, capital of east China's Zhejiang Province, were attended by more than 300 representatives from governments, private businesses, and research institutions in both China and Africa.

Zhejiang is home to many of China's most successful private businesses. They contributed nearly two-thirds of the provincial economy in 2017, according to local statistics. Hangzhou is clustered with the country's internet giants such as Alibaba and Netease.

"The cooperation between China and Africa presents an opportunity for entrepreneurs," said Jack Ma, chairman of Alibaba Group. "Internet, e-commerce, these are all areas entrepreneurship can play an important role."

Statistics from China's Ministry of Commerce shows that the trade volume between China and Africa reached 170 billion U.S. dollars in 2017, up by 14 percent.

"Investment from China's private businesses has also increased rapidly and is gradually becoming a new force in China's investment in the continent," said Qian Keming, deputy minister of Commerce at a press conference held in Beijing late August.

The number of Chinese-invested companies in Africa has exceeded 10,000, with more than 80 percent of them being private businesses, according to statistics from the Ministry of Commerce and China-Africa Business Council.

Wang Jianyi, chairman of Hangzhou-based Futong Group, predicted that around 150,000 km of optical cables will be laid in Africa in the next 15 to 20 years.

"That would be worth hundreds of billions of dollars, " Wang said.

Futong Group is one of China's top 500 private enterprises in 2017 and leading vendor of optical fiber and cables in China. The company has tapped into many markets in Africa, including Kenya, Nigeria, Seychelles, and Angola.

"Africa is a magical land where we often feel a calling," Wang said. "It is full of opportunities."