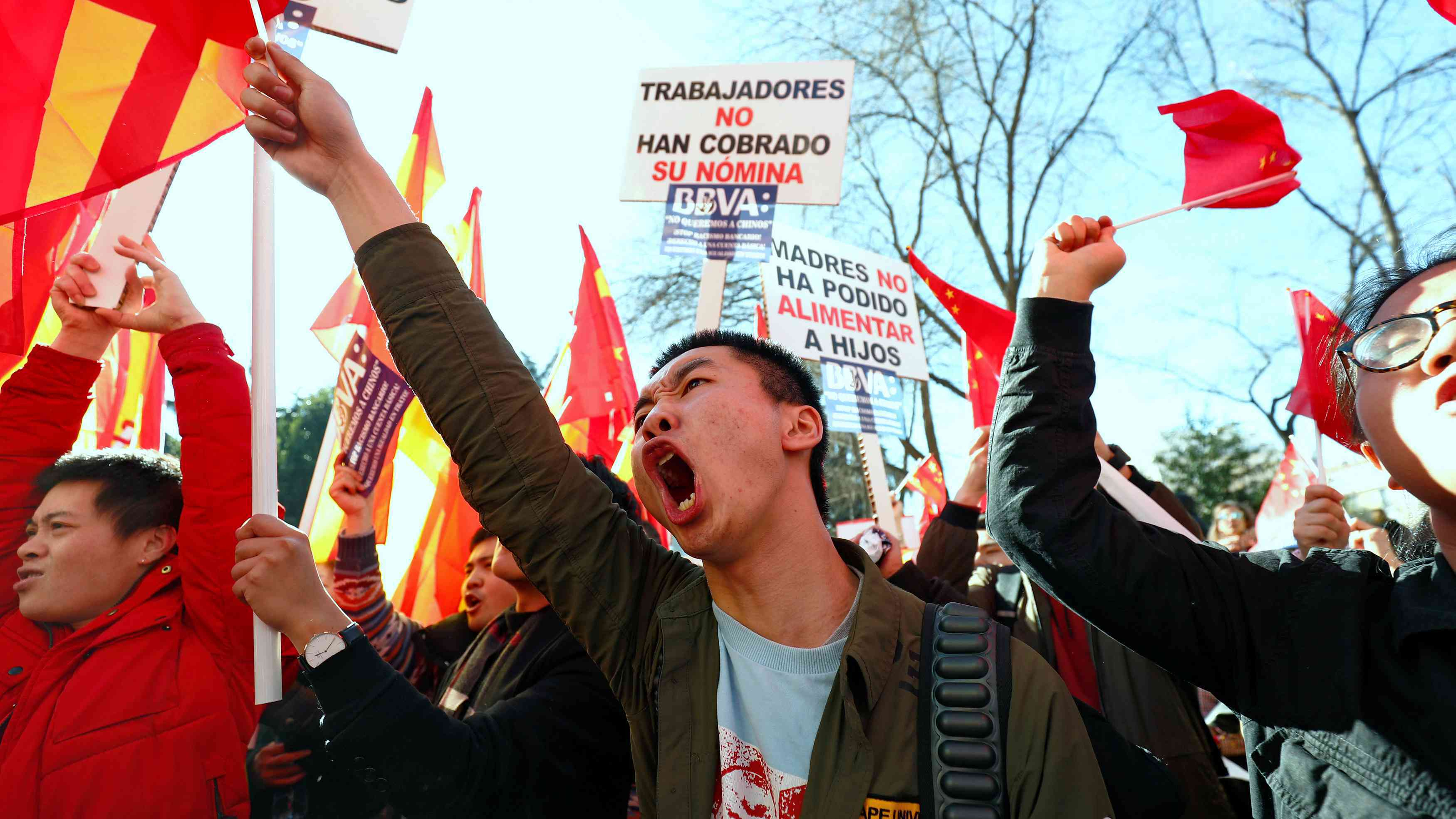 Furious over their personal bank accounts being frozen without prior notice, hundreds of Chinese citizens took to the streets of Madrid on Friday in a rare protest against Spain's BBVA bank, accusing it of indulging in "racism."

The protesters said that the bank, after arbitrarily blocking their accounts, told them that the action was taken under Spain's money laundering regulations, which the Chinese nationals vehemently denied.

"We gathered here to demand equality because we are ordinary citizens. I work in a consultancy office and I don't have suspicious transactions," Yunajie Chen, a Chinese accountant who arrived in Spain as a child and has been a BBVA client for over six years, told Reuters.

BBVA, Spain's second-largest bank, declined to comment on particular cases but said in a statement that it "does not discriminate against any clients based on nationality and treats all customers with the same criteria."

The bank said it had frozen accounts to comply with measures to fight money laundering, adding it was working to resolve the problem.

The protesters claimed that other banks have also blocked accounts of Chinese citizens and Spanish citizens of Chinese origin recently, but to a lesser extent than BBVA.

"BBVA bank is blocking all accounts of Chinese citizens, and even Spanish citizens of Chinese origin," Ding Li, a Madrid-based lawyer, told AFP, adding that not a single customer received advance warning. He also complained that BBVA is "taking a really long time to respond" to affected customers.

Media reports suggest all the banks in Spain are seeking additional documents, detailing their tax situation and income, from Chinese customers before they may re-open their blocked accounts or re-open a new account.

Dawein Ding, vice-president of a Chinese radio station in Madrid who also works for the Chinese Association in Spain (ACHE), complained that banks such as BBVA are deliberately making the process more complicated for Chinese citizens.

"For a Spaniard to open a bank account they just have to show their identification card, whereas Chinese citizens have to deliver much more paperwork such as evidence of their work like payslips and contracts," Dawein told Reuters.

The protesters demonstrated outside a major BBVA branch in the Spanish capital. They said the bank's action has led to the victims not being able to pay their bills and in some cases even tuition fees for their children.

"What BBVA and some other banks have done has damaged the legal interests of thousands of ordinary Chinese, the lives of many people have been affected," ACHE's Feng Mao said, adding that around 5,000 individuals have seen their accounts frozen by BBVA.

Spain beefed up its money laundering regulations last year. The law requires clients to give the bank a series of personal details and background information, regardless of their nationality, Reuters quoted a spokesperson for the Spanish banking association AEB, Jose Luis Martinez Campuzano, as saying.

However, Spain's economy ministry and the Bank of Spain declined to comment on the complaints of Chinese citizens on Friday.

This is not the first time that Spain has targeted Chinese nationals or entities over money laundering allegations.

Reports in Xinhua, China Daily and Global Times stated that ICBC cooperated with Spanish authorities in the investigation, with the bank's Madrid branch also informing the Chinese Embassy in Spain that it used the latest anti-money laundering system provided by Spanish authorities to control capital.

Later in September 2017, Spain launched an investigation into ICBC's European management in Luxembourg as part of a widening probe into the laundering allegations.

In a statement following the Spanish action, Chinese Foreign Ministry spokesperson Geng Shuang asserted that ICBC had played a positive role in promoting financial cooperation between China and Spain.