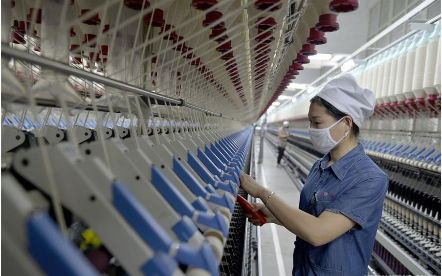 A worker is seen at a workshop of a spinning factory in Xingtai City, North China's Hebei province, Dec 20, 2018. (Photo: Xinhua)

Wu Zhenglong, governor of Jiangsu, said while delivering the annual government work report the province's GDP is predicted to rise 6.7 percent to 9.2 trillion yuan, exceeding the GDP of Australia, the 13th-largest economy in the world.

There is no doubt Guangdong's GDP would exceed 9 trillion yuan last year, and the only suspense left is if the figure could surpass the 10 trillion yuan mark, the website said.

Sichuan province is a newcomer to the four-trillion-yuan GDP club. Yin Li, governor of Sichuan, said in the annual government work report the province's GDP is expected to exceed four trillion yuan, with a growth rate of 8 percent.

Shanghai, which recorded a 3.06 trillion yuan GDP in 2017, is the first city with a GDP topping three trillion yuan in China. Now, Beijing, the capital of China, is expected to become a new city to join the three-trillion-yuan club.

The annual government work report, delivered by Beijing Mayor Chen Jining at the opening meeting of the annual session of the Beijing Municipal People's Congress, set the GDP growth target at 6-6.5 percent in 2019, compared with last year's target of about 6.5 percent.