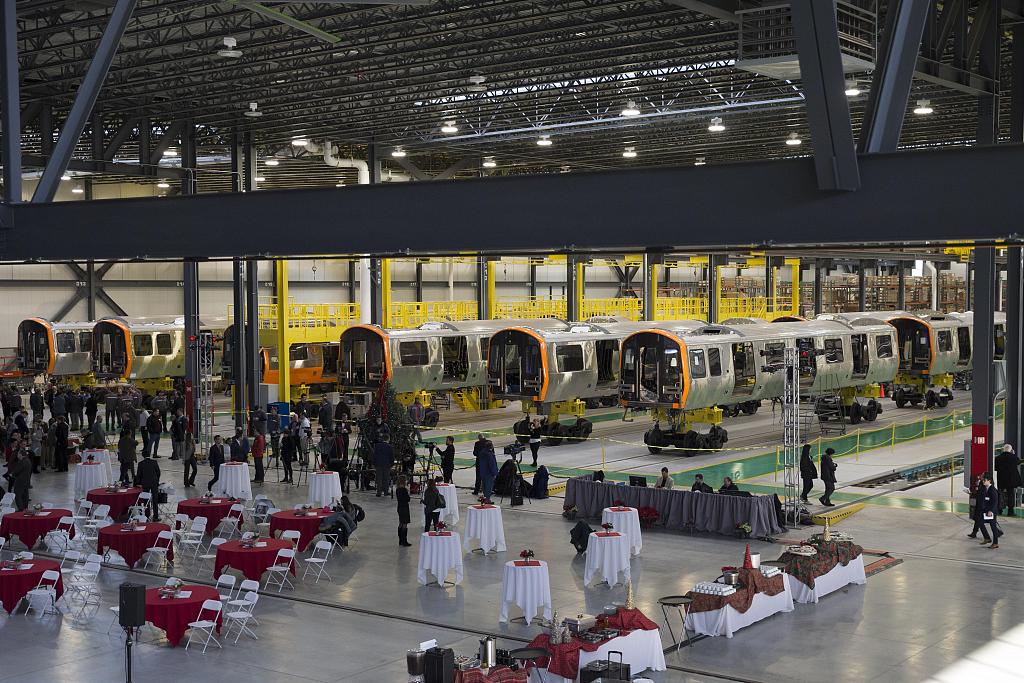 SPRINGFIELD, the United States, Dec. 18 (Xinhua) -- A Chinese rail company on Tuesday said that it has completed the production of a pair of subway cars to be delivered to the U.S. state of Massachusetts.

The CRRC Corporation said that the vehicles are the first pair of next-generation rail cars built in its U.S. factory, marking a "significant milestone" in the planned delivery of subway trains to the Massachusetts Bay Transportation Authority, a division of the Massachusetts Department of Transportation, to replace cars that have been serving the Orange Line of Boston for decades.

The Chinese company said in a statement that overall, it is manufacturing 404 subway vehicles for the U.S. state, including 152 for the Orange Line and 252 for the Red Line.

With Springfield City as its factory's location, the CRRC MA, the corporation's first North American office, has hired some 220 local residents, making the factory a major North American manufacturing hub to assemble and test all the cars the continent produces.

The company has also offered training classes for the local employees "on state-of-the-art tools and equipment necessary to build the next generation of new rail cars," it said.

Moreover, companies from other nations investing in the United States also participated in the production of the cars as part of its globalization strategy, the CRRC said.

At a ceremony held on Tuesday at the factory in Springfield to mark the completion, CRRC MA's President Jia Bo said, "We are proud to deliver on-time ... CRRC's first subway cars built in the United States by talented workers standing with us today."

"Hundreds of jobs have been created, stimulating the local economy," he said.

"Our achievements prove the existence of well-nourished partnerships born from mutual cooperation and respect. We look forward to building CRRC's presence in the United States using our journey here in Massachusetts as the footprint to success," he said.

Stephanie Pollack, Massachusetts's state secretary of transportation, also said at the ceremony that "today is a major milestone in that these two new rail cars ... are the first to be produced in Massachusetts that will ultimately lead to an entire fleet replacement."

The CRRC MA said that its technological competitiveness will ensure "the safety and customer amenities" that include stainless steel vehicle car shells that incorporate laser-welding technology for better exterior finish, crash energy management for enhanced customer and operator safety, LCD monitors for customer information, and train-to-wayside communications via a wireless network for monitoring and detecting potential maintenance needs.

"We are not surprised that big countries like China and the U.S. may not see eye to eye on all issues, but we also need to make our cooperation more visible, because cooperation is the mainstream, the common aspiration of our local people, and the best options for all nations," said Huang Ping, Chinese consul general in New York.