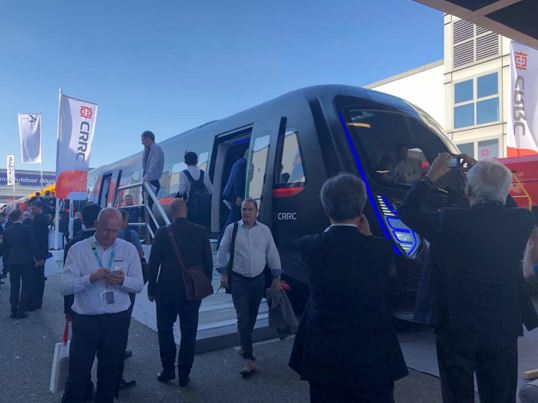 This year’s event featured 3,062 exhibitors from 61 countries and regions who presented more than 400 rail sector advances at the Berlin Exhibition Grounds.

A 13 percent drop in total weight made possible by carbon fiber technology. The most important feature with the newer generation metro cars is how light and energy efficient they are when compared with older models.

This latest model, with its large-scale applications, is a first for China.

The train’s windows are much more than the standard as they can function as displays. The windows act as a “superpad” and can provide a variety of graphics and videos. Passengers can watch the news, videos, and browse the Internet, and can do by just touching the window.

Maximum travel speed is 140 km per hour and features the latest in full automation driverless technology. After the train was unveiled, CRRC proved that it belonged alongside other powerhouse manufacturers such as Siemens, Alstom and Stadler.

Besides the black "Cetrovo," the new hybrid AC driving train made for Germany's Deutsche Bahn uses “diesel + battery" hybrid power technology with a maximum speed of 80 km per hour.

It conforms to the Technical Specification for Interoperability (TSI) standards and Federal Railway Authority of Germany requirements.

On June 20, 2018, CRRC ZELC signed a framework agreement with Deutsche Bahn for 20 new hybrid shunting locomotives and the order of the first four shunting locomotives, indicating that China's rail transit vehicles are recognized by the world's high-end market.