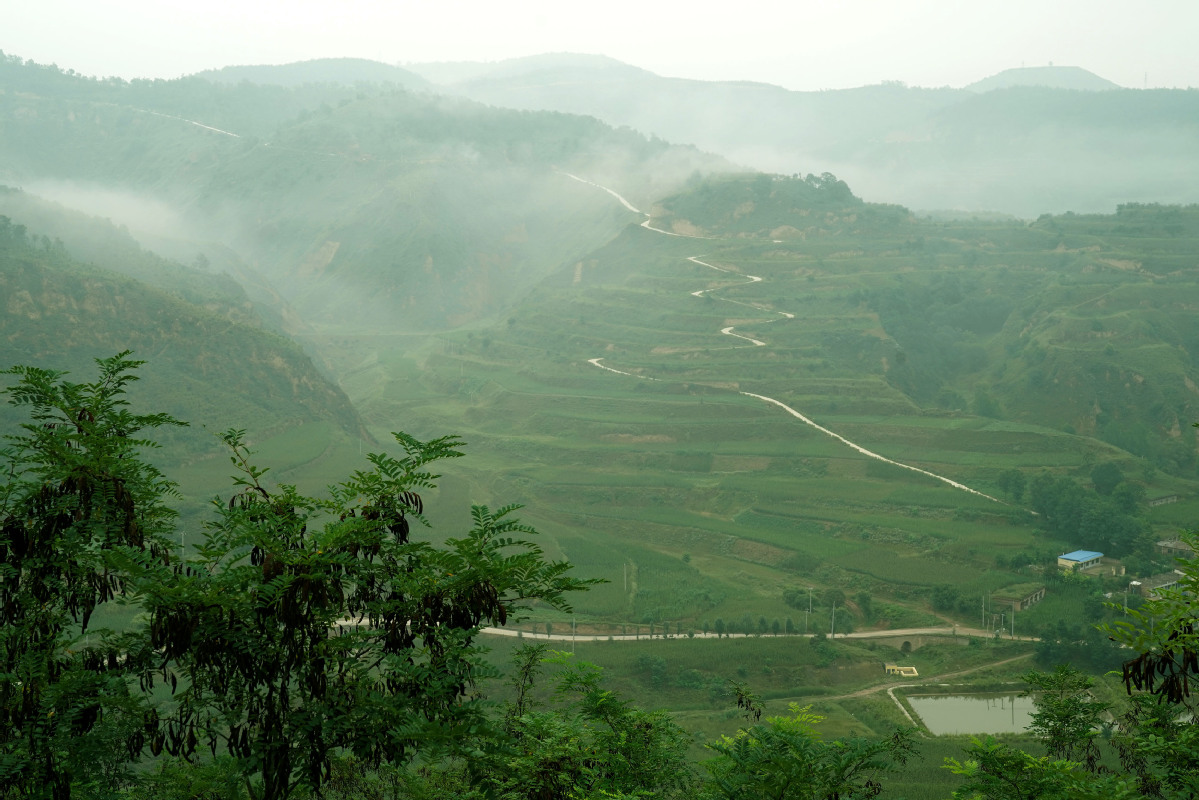 Two decades of reforestation has transformed the bare mountains in Yan'an's Fengzhuang village into a lush treescape. (Photo: China Daily)

Barely a day passes without the global anxiety of climate change rearing its ugly head. Man-made carbon emissions from fossil fuels are now so significant that scientists claim we have entered a new and vastly different geological time period, the anthropocene.

Curbing the growth of this chiefly relies upon reducing CO2 emissions into the atmosphere. With its booming economy and unprecedented rate of growth, China has taken active steps toward taking responsibility for this threat that affects the international community.

China's proactive policy of tree-planting has been recognized globally as playing a significant role in reducing global warming. The country's land biosphere has huge potential for what are known as carbon land sinks, where trees can take in and store CO2. A recent study in the journal Nature suggested that currently, China's greenery is responsible for taking in 45 percent of the country's carbon emissions annually.

The country has made a strong commitment to move to complete carbon pollution neutrality by 2060, a move that would help drastically reduce the rate at which the planet's temperature is rising. Professor Yi Liu from the Institute of Atmospheric Physics of the Chinese Academy of Sciences said in a statement: "Achieving China's net-zero target by 2060, recently announced by President Xi Jinping, will involve a massive change in energy production and also the growth of sustainable land carbon sinks. "

China has vast swaths of oxygenating natural beauty. The ability of these expanses of greenery to act as carbon sinks has previously been underestimated. In China's southwest, Yunnan and Guizhou hold huge ranges of diverse plant life, along with Jilin province in the northeast. Thanks to authority action, the National Forestry and Grassland Administration of China estimates that they have increased tree-covered territory by several million hectares, equivalent to a forest the entire size of the country of Ireland.

This operation is unrivalled anywhere else in the world, and is an accumulation of tree planting expertise stretching back decades. China has been consistently planting trees since 1978, when the motivation was to stop the spread of desert in the Inner Mongolia autonomous region on the northern borders.

Fighting climate change is a multipronged attack, and private companies in China are also leading the charge in promoting reforestation. Alibaba takes part in a tree-planting initiative, where users on the Alipay platform are rewarded through allowing them to grow a virtual tree on their smartphones whenever a low carbon choice is made. When enough points are stacked up, actual trees are planted on their behalf. Alipay is set to invest a further $28 million in planting operations nationwide. Reconnecting consumers to environmental concerns through such initiatives is a powerful way of harnessing China's titanic e-commerce market power for sustainable green action.

The science behind reforestation advances every year, with the best practice on how to maintain ecological repayment becoming more complex. Many early forests fail to survive as they are homogeneous in nature, consisting of just one species of tree. A burgeoning and thriving ecosystem relies on a diverse spectrum of species, all interdependent for coexistence. Biodiversity, therefore, goes hand in hand with being an effective carbon sink, meaning that the next generation of Chinese replanting operations may also end up creating much-needed wildlife habitats in the process.