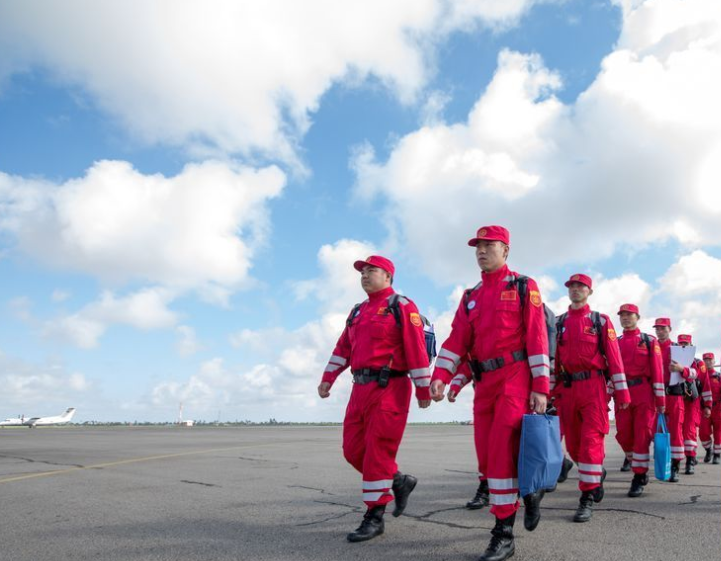 A Chinese rescue team comprised of 65 members arrived at Beira International Airport in Mozambique on Monday after Cyclone Idai wreaked havoc in the southeastern African country.

The rescue team has brought with them some 20 tonnes of equipment and materials for search and rescue purposes, as well as for communications and medical treatment.

The rescue team, at the request of the Mozambican government, was dispatched by the Chinese Ministry of Emergency Management with the approval of the Central Committee of the Communist Party of China and the State Council.

Sources with the Chinese Ministry of Emergency Management said this also marked the first overseas rescue mission by a Chinese team since the set-up of the ministry in March 2018.

The Mozambican government announced on Monday in Beira, capital city of Sofala province, that the number of people affected by Cyclone Idai in the country has risen to 794,000, adding up to 128,941 have already been rescued.

The death toll remains at 446, according to the Minister of Land, Environment and Rural Development Celso Correia, who spoke at a press conference, stressing that the rescue teams have not yet finished searches at all affected sites.

Correia said there were already cases of diarrhea reported in some accommodation centers, but the health system is assisting people, and the government is working with partners to make the mitigation plan more efficient.

Asked by Xinhua about the stage of donations and rescues, the minister said the priority is to save lives by delivering food and providing medical care.

"We have support in donations and rescue teams that continue to arrive, but now the Institute for Disaster Management is making strategic management," said Correia.

"It was exactly the kind of help we need, basically in the field of health, environmental sanitation, among other supports." Correia said.

Minister Correia said that emergency operations are becoming more organized and with targeted approaches, being able to provide quick responses in a timely way.

During a tour of Beira on Monday, former Mozambican president Joaquim Chissano said reconstruction of Sofala province which was hard hit by Cyclone Idai may take up to three years.

Chissano arrived in Beira, capital city of Sofala province on Monday morning to visit the areas struck by Cyclone Idai, carrying a message of resilience and comfort for the victims.

"The reconstruction of the main structures, resettlement of the population may take short period, if the support provided by the international community is in big quantity," said the former president.

He warned that the danger hasn't finished yet because there are bodies to be found, and diseases will kill people, "but with all the forces combined all this can be mitigated," he said.