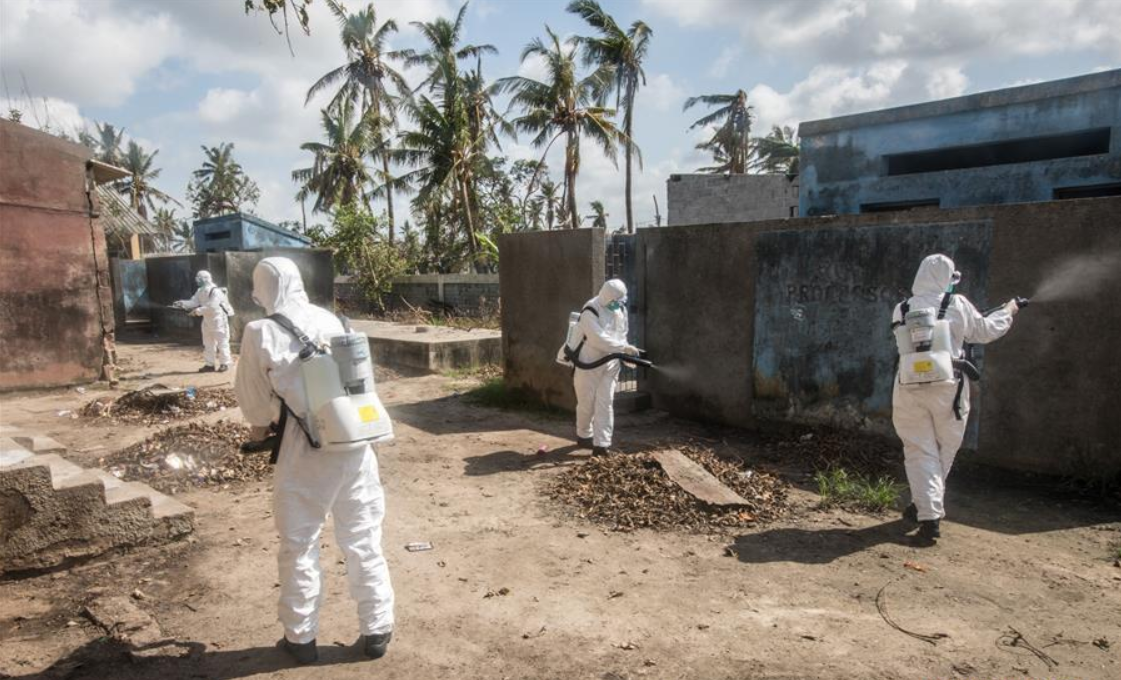 BEIRA, Mozambique, March 30 (Xinhua) -- Fifteen days have passed since Cyclone Idai made landfall near the coastal city of Beira in central Mozambique.

The sky has been clear in the past full week without rain, which is a good omen for a city ravaged by storms and flooding rains for so long.

In the densely populated neighborhood Munhava, if you ask a local child how he or she has been doing, the most likely answer you would get is: I'm doing okay.

When a group of Chinese medical staff sprayed the facilities at June 25 Elementary School, kids were running around over an open gutterway, romping after one another.

Everything looked fine for most of the local children, but ten-year-old schoolgirl Yolanda Sousa was worried.

Sousa lived with her mother, her sister and aunt. She feared that her aunt, who has been in bed and suffered from diarrhea for days, was going to die.

"I know the Chinese are here to protect us from this kind of disease. I have the habit to wash my hands before eating or after toilet," said Sousa, adding that she was told to wash her hands with soap or plant ash.

It's easy even for a 10-year-old to keep personal hygiene habits if she has her own place to stay, but things will get much more difficult if too many people huddle together in one single room, under the same roof.

Sousa's school has been the shelter for 318 victims of the Cyclone Idai, and its deputy director Joaquim Joao said the spraying is important, because "many victims live in one classroom separated by sex. Many are children and women; they deserve to be at some place cleaner."

"The conditions are not good for everyone who lives here. They sleep in the classroom on the ground, side by side," said Alberto Muanido, a local research assistant of the Health Alliance International who assisted the government in identifying the places in need of sanitizing.

"Many cases of diarrhea came from the neighborhood of Munhava. Right now in the school nobody has the symptoms. We only asked the team to come here to prevent it from happening," Muanido told Xinhua.

Laurinda Fael, a peasant, moved to the school with her three children since the dawn of March 15 after their house was destroyed by the storm. She said they didn't expect to stay here for long.

"The help from the Chinese is good, but if I got any help to rebuild my house, I will move out," said Fael.

National Director of Medical Care Hussen Issa said the local newspaper "The Country" reported Thursday that five people have died from severe diarrhea over the last two days in Munhava, but it cannot be confirmed whether the deaths were caused by cholera.

Mozambican President Filipe Nyusi said on Thursday that the government intends to ensure the vaccination of 800,000 people against cholera to prevent outbreaks of the disease.

Zhu Wei, head of the medical staff of the Chinese rescue team, whose team sanitized three temporary shelters on Friday morning in Beira, said their work was very important for the recovery of normal life and the reconstruction of the disaster-stricken areas at this crucial stage.

"If the epidemics make the disaster area into an infected area, the subsequent relief work will increase exponentially," said Zhu.

Asked if there was going be an outbreak, Muanido said: "It can be contained, we have worse situation before and we managed to contain it."