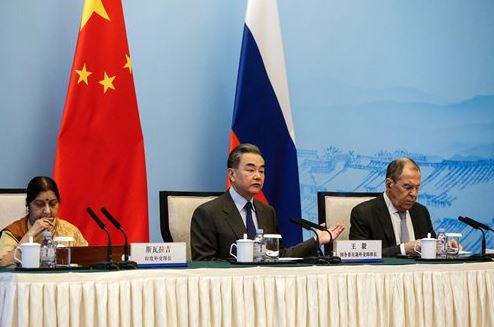 Foreign ministers of China, Russia and India held the 16th trilateral meeting on Wednesday, calling for enhanced communication and cooperation in counter-terrorism cooperation.The ministers strongly condemned terrorism in all forms and manifestations. They called on the international community to strengthen UN-led global counter-terrorism cooperation by fully implementing the relevant UN Security Council resolutions and the Global Counter-Terrorism Strategy, read a communiqué the Chinese Foreign Ministry released on its website on Wednesday night. They vowed to eradicate the breeding grounds of terrorism and extremism. "Islamic State terrorists show a tendency to move toward Middle-South Asia regions that center around Afghanistan. Under this circumstance, main regional countries like China, Russia and India, need to enhance cooperation on counter-terrorism to safeguard regional security," Fu Xiaoqiang, an expert on South Asian studies at the China Institutes of Contemporary International Relations, told the Global Times on Wednesday.Especially now that India joined the Shanghai Cooperation Organization in 2017, the three countries should make more efforts to combat terrorism on the platform, Fu noted. The ministers reiterated their firm commitment to multilateralism and the purposes and principles enshrined in the UN Charter. Foreign ministers of China and Russia reiterate the importance they attach to the status of India in international affairs and support its aspiration to play a greater role in the UN, read the communiqué.They also expressed firm commitment to a rules-based, transparent, non-discriminatory, open and inclusive multilateral trading system centering around the WTO and firmly opposed to unilateralism and protectionism. Fu pointed out that "as important emerging economies, China, Russia and India should enhance coordination in promoting economic globalization and fairness in international order in face of the 'America First' diplomatic policy upheld by US President Trump."The three countries share a mutual stance in many hotspot issues, such as the Korean Peninsula nuclear issue and maritime safety issue, Fu said. "Given the US' Indo-Pacific strategy, the three countries should increase their voices in regional safety to guarantee regional stability."In response to the Korean Peninsula nuclear issue, Chinese State Councilor and Foreign Minister Wang Yi said during the trilateral meeting that the second meeting between US and North Korean leaders is being held. "We appreciate their efforts to solve the issue," Wang noted, while reiterating that dialogue and negotiation is the fundamental path.  Wang chaired the meeting, which was attended by Russian Foreign Minister Sergei Lavrov and Indian External Affairs Minister Sushma Swaraj.The meeting was held in Wuzhen, East China's Zhejiang Province.