Xi said the relationship between China and Russia has become a major-country relationship featuring the highest degree of mutual trust, the highest level of coordination and the highest strategic value since the two countries established diplomatic ties 70 years ago.

"We should always regard each other as important development opportunities, support each other and draw on each other's strength to achieve revitalization together," he said.

Stressing that Russia is an important partner in the joint development of the Belt and Road Initiative (BRI), Xi said the alignment of the BRI with the Eurasian Economic Union is a model of regional economic cooperation.

The two sides should continue to promote cooperation in economy and trade, energy, science and technology, aerospace, connectivity, as well as cooperation at sub-national level and people-to-people and cultural exchanges, Xi said, adding that China will send a pair of giant pandas to Russia for joint research.

The BRI, proposed by President Xi, has provided an important platform and set a successful example for expanding international cooperation, and won increasing support from the international community, Putin said, adding that the presence of so many state leaders and representatives at this forum is a proof.

On the occasion of celebrating the 70th anniversary of diplomatic relations, Russia is willing to enhance high-level contacts with China, and deepen bilateral exchanges and cooperation in various fields, such as doing well in exemplary major projects in energy and connectivity sectors, he said.

The two leaders also exchanged views on issues including the situation on the Korean Peninsula and Venezuela, and agreed to communicate and coordinate closely in international and regional affairs and multilateral institutions. 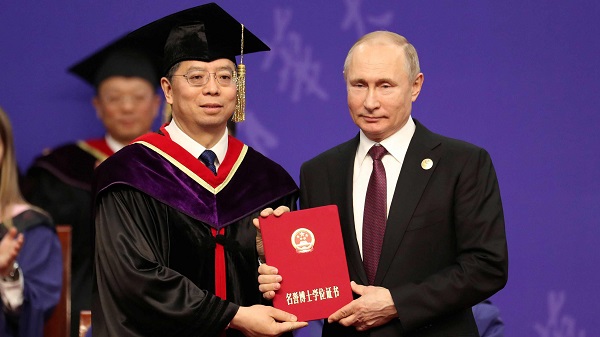 "President Putin is a good friend and old friend of the Chinese people, and has made historic contributions to deepening political mutual trust between China and Russia and promoting bilateral cooperation in various fields," Xi said, extending congratulations to Putin.

Xi said he hopes young Chinese and Russian students will contribute to China-Russia friendship for generations to come.