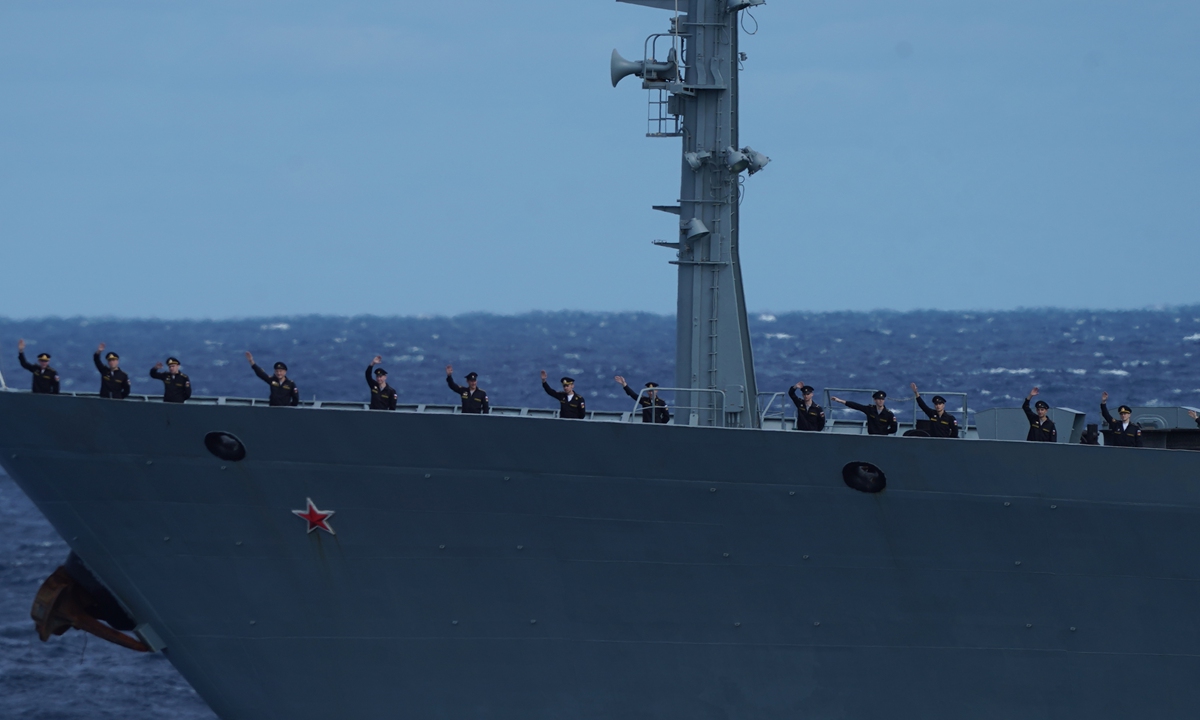 Russian soldiers wave at a ceremony on October 23, the last day of the first China-Russia joint sea patrol which started on October 17. (Photo: Xinhua)

A Chinese-Russian naval flotilla tackled external challenges, including close-in reconnaissance by Japanese forces, during the fleets' first joint sea patrol over the past week.

The seven-day patrol saw the warships circumnavigate Japan by traversing the Sea of Japan, the West Pacific and the East China Sea, transiting several strategically important straits in the process, with Chinese experts saying on Sunday that it displays China and Russia's firm determination to safeguard international and regional strategic stability and the high confidence in their capabilities of doing so.

From the start of the joint patrol, the Japan Maritime Self-Defense Force sent aircraft and vessels to follow the flotilla and attempt to gather intelligence, China Central Television (CCTV) reported on Saturday.

During the patrol, "the Chinese and Russian warships faced some external challenges, but we tackled these challenges together well," Senior Colonel Chen Weigong, the political commissar of China's Type 055 large destroyer Nanchang, the command ship of the joint flotilla, was quoted by CCTV as saying.

The Japanese Defense Ministry published the movements of the Chinese warships since they transited the Tsushima Strait into the Sea of Japan on October 11 for the Joint Sea-2021 exercises with Russia from October 14 to 17.

According to the Japanese releases, which said that Japan had dispatched aircraft and vessels for monitoring, the Chinese and Russian warships transited the Tsugaru Strait from the Sea of Japan into the West Pacific on October 18, were then seen heading south along the east of Japan on Wednesday and sailing to the west through islands to the south of Japan's main island on Thursday, and transited the Osumi Strait into the East China Sea on Friday.

It is anticipated that Japan would track and monitor foreign warship and warplane activities near it, so the flotilla is allowing Japan to see it, which shows its confidence, while also practicing dealing with Japanese tracking and monitoring at the same time, Shi Hong, executive chief editor of the Chinese magazine Shipborne Weapons, told the Global Times.

During the patrol, the joint formation strictly abided by international law and did not enter territorial waters of other countries, the Chinese Ministry of Defense said in a statement released on Saturday.

The joint maritime patrol is aimed at further developing the China-Russia comprehensive strategic partnership of coordination for a new era, elevating the joint action capabilities of both nations and jointly maintaining international and regional strategic stability. It is part of the annual cooperation plan between the two nations and is not targeted at any third parties, the Chinese Ministry of Defense stated.

The China-Russia joint warship flotilla featuring 10 warships and six carrier-based helicopters carried out the first joint maritime patrol between the two countries' navies in the Sea of Japan, the West Pacific and the East China Sea from October 17 to Saturday, during which they organized exercises over joint sea-crossing, joint maneuvers and live-fire weapon shooting, the Chinese Defense Ministry said.

At the end of the patrol, the two countries' warships separated in the eastern part of the East China Sea, and the Chinese ships returned to their home ports, CCTV said in a separate report on Saturday.

The patrol path also means that the Chinese and Russian warships circumnavigated Japan, which sends a warning to Japan as well as the US, which have been rallying allies to confront China and Russia, destabilizing the region, observers said.

Military expert Song Zhongping told the Global Times that the patrol showed a high degree of actual combat. Immediately transitioning from a drill to patrol is a mechanism of transforming from a peacetime to wartime status. "The formation of such a mechanism indicates that the capacity of China and Russia to make quick reactions in military cooperation is improving quickly," Song noted.

Zhang Junshe, a senior research fellow at the Naval Research Academy of the PLA, told the Global Times that the first China-Russia joint sea patrol in waters in the West Pacific is of vital significance in both sending a clear signal and practically enhancing combat preparedness.