Agricultural scientists from China who set a rice production record in a Dubai desert are expanding their test plantings to look for even more productive strains that suit local palates. 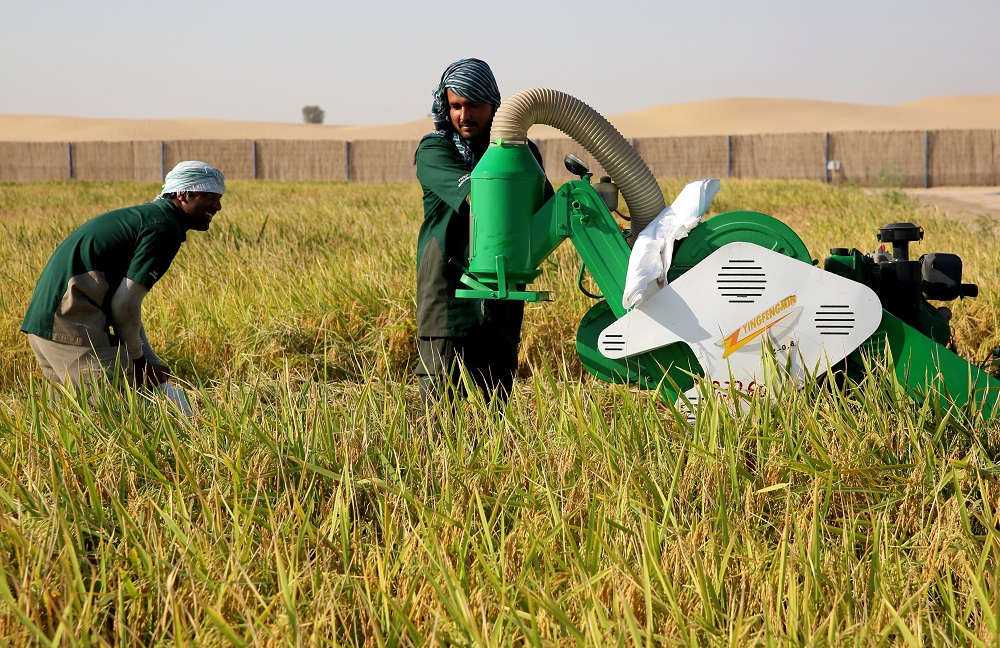 Farmers harvest crops as part of a test of saltwater-tolerant rice in Dubai. (Photo: China Daily)

The average annual yield－9.4 metric tons per hectare－has already more than doubled that of previous rice cultivation efforts in Dubai led by India and Pakistan, according to Cheng Yunfeng, manager of Wuhan Haidao International, which is based in Hubei province and oversees the trial planting program.

The program, which ran from November to June, turned 3.6 hectares of barren desert near the outskirts of the city of Dubai into green paddy fields.

The rice with such abundant yields is known as saltwater-tolerant rice and is a variety developed in China that can cope with heavy salt concentrations and being submerged.

The original, wild crop, discovered on the coast of Guangdong province in the 1980s, has been developed into a family of saltwater-tolerant strains. Trial cultivations across China maximized desirable traits before the project expanded overseas.

"The success of our first trial in Dubai is a crucial step in promoting saltwater-tolerant rice across the Middle East and even around the globe," Cheng said.

A decadelong cooperation plan was signed in mid-July to further expand trial plantings and encourage commercial adoption across the United Arab Emirates, he said.

Trying to grow rice in rocky desert soil is a huge undertaking in itself. In Dubai, a shortage of fresh water compounded the challenge and thwarted decades of attempts to grow crops on a large scale there.

"Ground water used for irrigation in Dubai has an average salt content of 1.6 percent, almost equivalent to the water in the South China Sea," Cheng said. "That would kill tender seedlings for sure.

"To address the issue, we first used the traditional approach of diluting the water's salt content to about 0.6 percent. More importantly, we adopted a dry, direct-seeding method that reduces demand for irrigation water.

"There is no need to apply the dry-seeding approach in our planting center in Wuhan, since the city has sufficient fresh water. But in foreign lands, it's crucial to upgrade techniques to adapt to local conditions."

"We transported two rice-sowing machines from China to speed up the process," Cheng said.

But Dubai also has advantages, such as warm temperatures and abundant sunlight that foster the growth of rice.

"In the past year, we have collected a certain amount of data and information that will help us determine optimal sowing seasons in the future and assess how different agricultural practices, including irrigation and use of fertilizers and pesticides, affect eventual output," Cheng said.

In future trial plantings, the company aims to isolate productive rice strains while further enhancing their resilience and fine-tuning the texture to the palates of local residents, who prefer fluffy rice to sticky rice.

"Efficient use of scarce water sources is also on top of our agenda," he said.