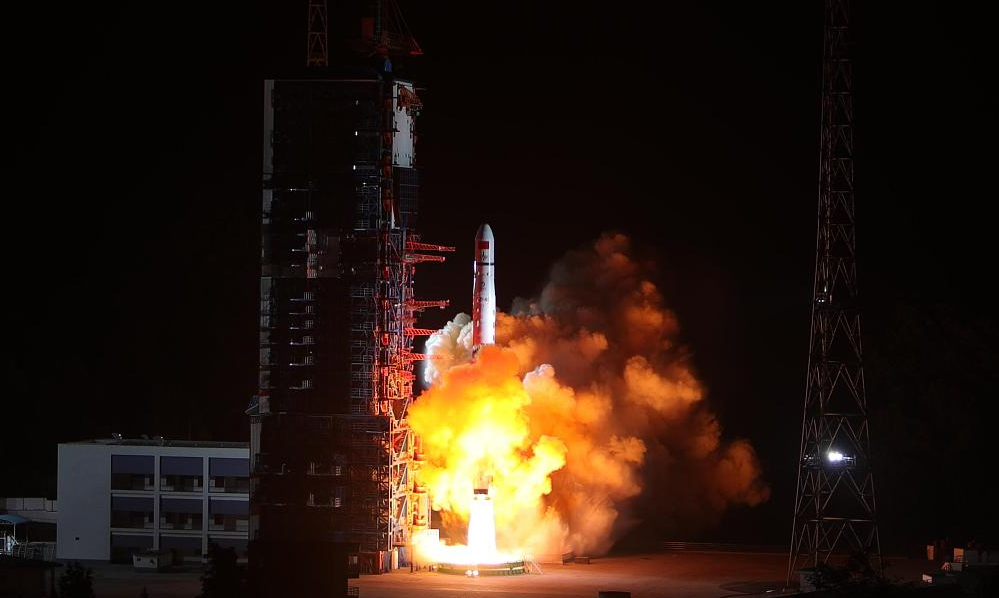 A satellite with a huge golden umbrella-shaped antenna is in an orbit more than 400,000 km from Earth, waiting for Chang'e-4, which is set to be the first ever probe to land softly on the Moon's far side.

The relay satellite for Chang'e-4 will establish a communication link between the Earth and the far side of the Moon, and might serve probes from other countries, contributing to international scientific exploration, said Ye Peijian, an academician of the Chinese Academy of Sciences and one of China's leading space experts.

The satellite, named Queqiao, or Magpie Bridge, was launched on May 21 and has entered the Halo orbit around the second Lagrangian (L2) point of the Earth-Moon system, where it can "see" both the Earth and the Moon's far side.

The Chang'e-4 probe, including a lander and a rover, is expected to be launched later this year. Its mission to explore the far side of the Moon was proposed by Ye, who has worked in China's lunar exploration program since Chang'e-1 more than 10 years ago.

Chang'e-4 follows on from Chang'e-3, which was launched at the end of 2013 and became the first Chinese spacecraft to soft-land on and explore an extraterrestrial object.

After Chang'e-3 accomplished its mission, China's space sector debated Chang'e-4's destination. Some were in favor of landing on the near side of the Moon again, because it's safer.

"I disagreed with that. Why should Chang'e-4 repeat what Chang'e-3 had done? We should not be afraid of failure in scientific exploration. We need innovation," Ye said.

He suggested sending the Chang'e-4 to the Moon's far side. This would be unprecedented and innovative.

He believed the United States and Soviet Union had wanted to do that in their lunar programs, but hadn't because of technological restrictions at the time.

Since the Moon's revolution cycle is the same as its rotation cycle, the same side always faces the Earth, and most of the other side is never seen from Earth. Landing and roving on the far side of the Moon require a relay satellite to transmit signals.

The first ever satellite operating on the Halo orbit around the L2 point, Queqiao used relatively small amounts of fuel during its journey to the planned orbit as it was under precise control. Its designed life is three years, but Ye said it might work for seven or eight years.

That means it could also provide communications for probes from other countries if they intend to explore the Moon's far side in the near future.

"That's the significance of going to the far side of the Moon. China will not only be the first to go there, but will also contribute to world scientific exploration," Ye said.

A reliable long-distance data transmission link is a key technological goal for space experts around the world. Queqiao carries an umbrella-shaped antenna with a diameter of 4.2 meters, the largest communication antenna ever used in deep space exploration.

The antenna was the central difficulty of the relay satellite, and took engineers a long time to develop, according to Ye.

Its name, Queqiao, was selected from more than 100 candidate names in a public naming contest.

In a Chinese folktale, magpies form a bridge to enable Zhi Nyu, a daughter of the Goddess of Heaven, to meet her beloved husband, cowherd Niu Lang, after they were separated by the Milky Way.

"We think the name is easy to understand, and it signifies the establishment of a bridge of communication," Ye said.