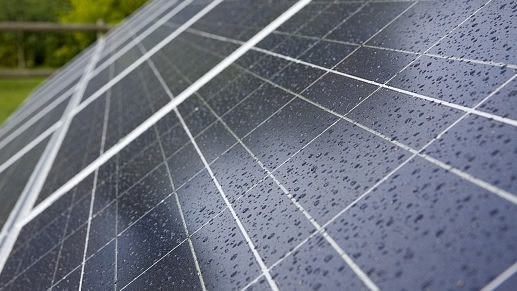 Chinese scientists have developed a cost-effective hybrid power generator that generates electricity both from sunlight and raindrops.

In a study published in the latest edition of ACS Nano journal, scientists from China's Soochow University introduced their new invention: A device that combines an existing solar cell with a triboelectric nano-generator (TENG).

The solar cell, as its name suggests, collects solar energy as the source for electricity, while the TENG harvests the mechanical energy generated from the motion of raindrops and transforms it into electricity.

According to Wen Zhen, the paper's first author, the biggest breakthrough in this research is that the device is an integrated generator comprising a solar cell and a TENG, and that the two parts share a mutual electrode, which transfers energy from the TENG to the cell.

"The mutual electrode for both the TENG and the solar cell simplifies the structure," Wen told Xinhua.

"Compared to previous work, the simple design of the mutual electrode reduces the number of functional layers, which greatly improves the output efficiency," he was quoted as saying by phys.org, a web portal that compiles science and technology news.

In addition to making the device more compact, the innovative design also brings advantages to both the solar cell and the TENG. For example, the TENG actually acts as a waterproof barrier to protect the solar cell so that water will not penetrate through the silicon.

Furthermore, the textured surface of the electrode, known as PEDOT:PSS, avoids unwanted reflections, thus enhancing light collection. Also, by equipping the device with another textured polymer called PDMS, the scientists created a greater contact area between the TENG and falling raindrops and improved the performance of the nano-generator.

Since the polymers are transparent, the solar cell can still generate energy from sunlight, as well as from falling raindrops.

Although the solar cell and the TENG make the device dual-functional, Wen said the two parts cannot function simultaneously "due to the design of the mutual electrode," but he considered this only a minor drawback.

He said in case of a sunshower – where sunshine and raindrops appear at the same time – people will have to abandon one of the hybrid generator's two functions. "But I don't think that is often the case," he added.