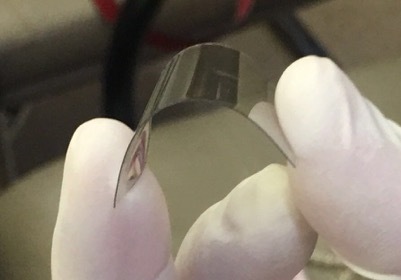 Chinese scientists have found a kind of inorganic semiconductor, which has good ductility and flexibility at room temperature, which may be used in flexible electronics.

Fulfilled by researchers from the Shanghai Institute of Ceramics, the harvest was published in "Nature Materials" in April.

Ductility is common in metals while it is rarely observed in inorganic semiconductors, especially at room temperature. Most semiconductor materials are brittle and cannot bend, pull or compress.

The newly-discovered semiconductor a-Ag2S is ductile like metal and easily changes shape instead of breaking under outer deformation, according to the research.

The material is expected to be applied in flexible electronic technologies such as wearable devices.

For the application of flexible electronics, the research team also produced a thin film made of a-Ag2S and found that it had great deformability and good electrical properties.