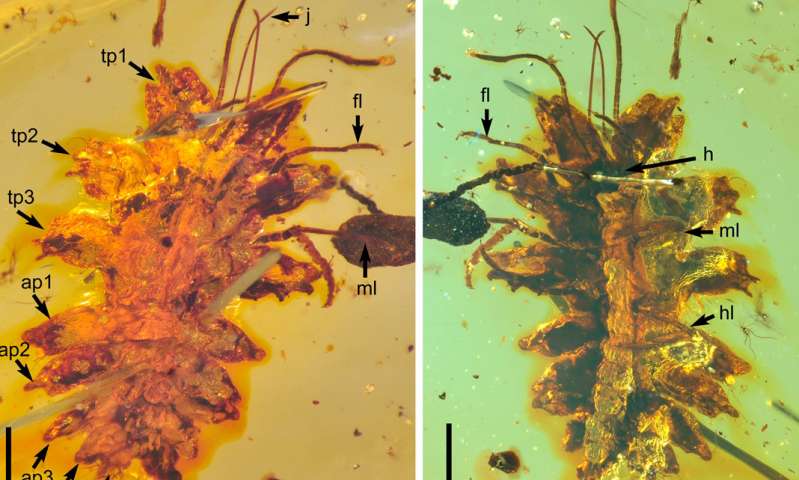 Chinese paleontologists reported a new lacewing species that can mimic liverworts, which is a rare camouflage in both modern and fossil ecosystems.

In a study published on Thursday in the journal Current Biology, researchers from China Agricultural University, the Nanjing Institute of Geology and Palaeontology under the Chinese Academy of Sciences, found the larvae living 100 million year ago were anatomically modified to mimic coeval liverworts, the earliest terrestrial plants.

This discovery represents the first record of liverwort mimicry by fossil insects and brings to light an evolutionary novelty, both in terms of morphological specialization as well as plant-insect interaction.

Camouflage and mimicry are pervasive throughout the biological world as part of the usual interactions between predators and their prey, allowing both to avoid detection. Among insects, the icons of mimicry include familiar stick and leaf insects, leaf-like moths and katydids.

These larvae have broadly foliate lateral plates on their thorax and abdomen. It is the only species known among lacewings with distinctive foliate lobes on the larval body, according to the researchers.

Such morphological modifications grossly match some coeval liverworts. The new larvae are the first example of direct mimicry in lacewing larvae. The morphological specialization in the new chrysopoid larvae is unique and is unknown among any living or fossil lacewings.

While the anatomy of these larvae allowed them to avoid detection, the lack of setae or other anatomical elements for entangling debris as camouflage means their sole defense was mimicry.

Members of the species could have been stealthy hunters like living and other fossil Chrysopoidea or been ambush predators aided by their disguise.

Liverworts are a diverse group distributed throughout the world today, including approximately 9,000 extant species. Liverworts have been diverse since the start of the Late Cretaceous, including in the Burmese amber forest, which was a typical wet, tropical rainforest.

Like their extant counterparts, Cretaceous liverworts grew on the leaves and bark of trees as well as on other plant surfaces.

The researchers suggested that the larvae probably lived on trees densely covered by liverworts, with their liverwort mimicry aiding their survival.