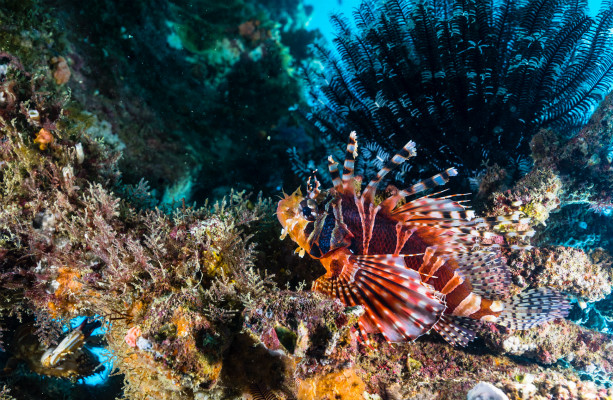 Deep in the silent sea, Huang Hui can hear only bubbles gurgling from her oxygen tank. She can only see a few meters around her, feeling small and alone.

She plants corals, the size of her palm, on the seafloor, hoping they one day become a forest.

If her dream is realized, the forest will have vivid colors, with fish weaving in and out.

A coral biologist with the South China Sea Institute of Oceanology under the Chinese Academy of Sciences, Huang has studied coral for around 20 years. Now she and her team are building a large pilot zone and a demonstration area for coral planting in the South China Sea.

Coral is hailed as rain forest or life engine of the sea. Though it covers less than two thousandths of the seafloor area, it is the habitat of nearly 30 percent of marine species, making coral reefs among the most diverse ecosystems on the planet.

Globally coral provides a living for half a billion people, generating billions of dollars of revenue from tourism and fishing. The South China Sea accounts for 2.57 percent of the resources around the globe, ranking eighth in the world.

Corals require precise living conditions: water can neither be too hot nor too cold, the ideal temperature ranging from 23 to 27 degrees centigrade; hydraulic pressure cannot be too high; salinity must be moderate and stable; and the environment must be clean.

Huang still remembers the first time she went underwater. It was in 2002 in the South China Sea, and she saw thickets of corals, dotted with fish, lobsters, holothurians and echinus. "It was stunning and exciting," she recalls.

Her team has investigatedall the coral reefs in China. They have corrected and added to many records. They found China has almost 300 kinds of coral.

However, Huang says, "In recent years we have seen bleached dead coral reefs in many places, which always saddens me."

Scientists are now wondering if corals can be planted on the seabed much like trees on land to significantly expand the acreage of coral reefs.

Huang and her team have been trying to cultivate coral on a small scale since 2009. After numerous failures, little by little they learned how to grow various corals in different undersea environments.

Huang uses afforestation on land as an analogy for coral planting. First, they grow a seedling in the nursery. When it becomes a sapling, they transplant it to where it's needed. First they cultivate the fast-growing species, and then foster the enduring ones.

Corals can reproduce through both asexual and sexual propagation. During the reproduction season, scientists can work underwater for days to acquire fertilized eggs for further study. They have acquired the technology for artificial fertilization of more than 10 coral species.

Chinese scientists also conduct research on asexual propagation. They cut coral reefs into finger-sized branches, and after some cultivation, stick them to artificial coral banks undersea.

They nail down racks on the seabed and hang ropes on them. Then they fasten coral cuttings on the ropes to make "coral trees," or they use a net as a floating bed, and plant corals on it.

"This is the nursery garden. The coral seedlings are too young. If they were directly planted on the seabed, they would be vulnerable to disturbance by sediments and sea flows. So we wait for the corals to grow and then transplant them onto the seabed," Huang explains.

"We aim to revive the whole ecosystem of coral reefs, so we not only do need to plant corals, but we also need algae, seaweed, seashells and other organisms living in harmony," Huang says.

Coral-planting undersea is harder than planting trees on land. "We face great difficulties, such as damage caused by human activities and typhoons. Newly planted corals are quite fragile, so typhoons are serious threats," Huang says.

Research assistant Yang Jianhui says, "During nighttime operations, we may encounter poisonous creatures underwater, which is pretty dangerous. If that happens, we must take emergency measures."

Planting corals undersea also is labor intensive and costly, says Huang. "After successfully planting corals, we need to figure out ways to cut the costs."

To date Huang's team has successfully planted about 100,000 square meters of coral reefs. In 2016, the survival rate of the sowed corals was 75 percent.

Coral reefs grow very slowly. The fastest-growing species grow about 10 centimeters a year, while some grow less than 1 centimeter. It will take decades or even hundreds of years before a large-scale undersea forest forms.

"As we look for ways to revive coral's ecosystem, we should also raise awareness of environmental protection, in order to curb factors causing coral degradation," adds Huang.