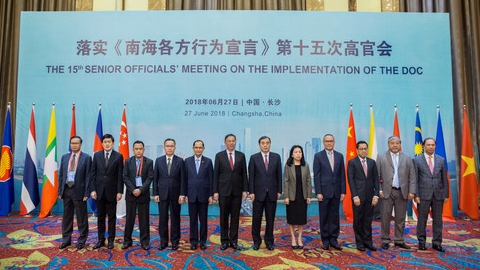 Chinese Vice Foreign Minister Kong Xuanyou and senior diplomats from ASEAN countries agreed on the importance of peace, cooperation, and the rule-based framework among China and the ASEAN members over issues of the South China Sea during senior officials' meetings in China earlier this week.

Officials stressed during the meeting sessions that China and ASEAN countries will continue to discuss issues including implementation of the DOC, maritime pragmatic cooperation, and negotiation of the code of conduct in the South China Sea (COC).

The meetings also reviewed the working agendas from 2016 to 2018.

All parties will continue their efforts in pushing forward dialogue and cooperation, strive for more outcomes and progress, so as to create favorable conditions for consolidating the current sound situation, according to China's Foreign Ministry.

All parties will continue their effort in settling disputes over the South China Sea through negotiation and consultation, keeping disagreements under the control of the rule-based framework, enhancing trust by cooperating, acting on preventions of maritime accident, maintaining peace of the South China Sea, and making it the sea of peace, the sea of friendship, and the sea of cooperation, according to the ministry.

The DOC, signed in 2002 by China and ASEAN countries, outlines the most important principles in the management of disputes on the South China Sea, and consultations for the COC were launched by the two sides in 2013. Both are aimed at safeguarding peace and stability in the region.