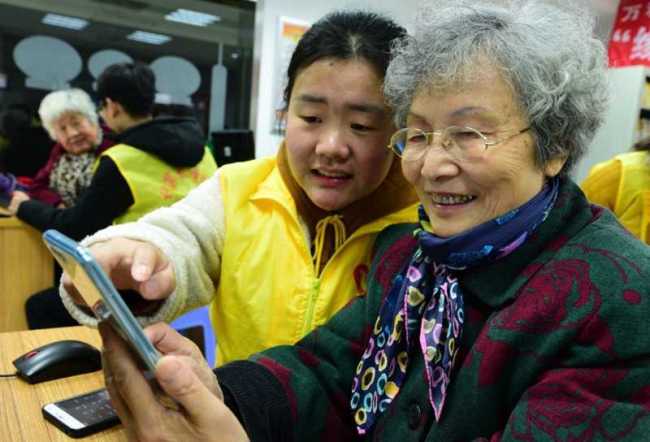 An 80-year-old woman named Ge Yuqi is learning how to use social application WeChat with the help of a volunteer on January 16, 2018. (Photo/People's Daily Online)

The study, conducted by Tencent Research Institute and Shenzhen University, aims to learn about the digital life of people above the age of 55 by analyzing their use of WeChat based on 3,051 cases from 956 families across 58 cities in China.

The report showed that elderly users spend around 1.37 hours on WeChat every day and have 104 WeChat friends on average.

Compared with other age groups, elderly users focus more on information and articles about topics of cooking and health. At the same time, they are more susceptible to Internet rumors.

The report also suggested that many use WeChat to have more interaction with their family members. For elderly users, 23.1% of their WeChat friends are family members, higher than both the young (9.7%) and middle-aged group (16.1%).

Still, 2.7% of elderly users said they blocked their family members on WeChat.

The report said 50.3% of elderly users learned how to use WeChat from their children or grandchildren. It also suggested that family members should be more patient in terms of introducing new technology to elderly people to help them enjoy a better digital life.

Tencent, owner of WeChat, said in May that the monthly active users of WeChat reached over one billion for the quarter, up 10.9% year on year.